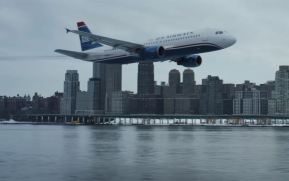 For his previous cinematic outing (the indifferently reviewed Inferno) Tom Hanks broke out the Grecian 2000 and presented audiences with an airbrushed version of his real self, trying to pass for someone considerably younger. Here, he’s playing someone closer to his own age, veteran airline pilot Captain Chesley Sullenberger,  who in 2009 managed to do the seemingly impossible, by crash-landing a stricken airliner in the Hudson River without incurring a single fatality. (Well, that’s 155 tickets sold, right there.)

Clint Eastwood’s retelling of the story is never less than compelling. Since we already know the outcome of the story, he can’t really hope to generate any real suspense; so he opts instead for a strange, circular narrative, opening with the moment that Sully and his co-pilot Jeff Skiles (Aaron Eckhart) realise that they are deep in the doo-doo after a catastrophic bird strike. From here, the story loops around like a plane looking for somewhere suitable to land, touching briefly on Sully’s early days in aviation, before finally revealing the workings of the crash landing itself.

The main tension in the story is generated when a team of crash investigators (including Breaking Bad’s Anna Gunn), assigned to examine the circumstances of the accident begin to look as though they might disagree with Sully’s account of the story, something which threatens to turn him from overnight hero to an absolute zero. A series of computer simulations have raised the distinct possibility that the plane might have been able to return safely to Laguardia airport, from where it had recently taken off. Hanks does his usual ‘Everyman’ persona with the understated dignity we’ve come to expect from him and he’s ably supported by Laura Linney as Sully’s unfortunate wife, stuck on the end of a telephone line, while her husband faces the hearing that could destroy his career.

It’s only in the film’s post credit sequences where Eastwood cannot quite resist tipping the project into cheesiness – we see the real Sully and the real survivors, making speeches at one of those celebrations the Americans love so much – and there’s an onscreen credit that pays tribute to the emergency services in New York who worked together to save so many lives. But ultimately you can’t help concluding that Sullenberger took a chance in a desperate situation and (luckily for him) it paid off.

Still, this is nonetheless an entertaining film, particularly when projected onto an IMAX screen, which makes the crash landing a startlingly immersive experience. Nervous fliers might want to give this one a miss.