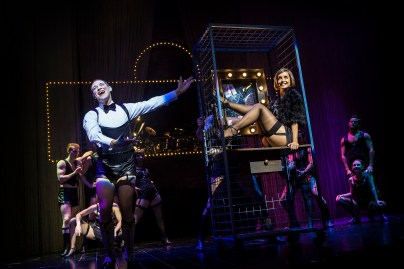 I think I know Cabaret because I’ve seen the movie. I love the movie. But tonight, at the Festival Theatre, I quickly learn that the stage version is very different. At first I’m disappointed. One of the things I like most about the movie is that it’s a musical where the songs are all supposed to be songs, performed in a club or at a rally. Here, characters sing instead of speaking, break into song to declare their love. In short, it’s a more traditional musical. And, as it goes on, I come to appreciate it.

Cabaret the movie is very much Sally Bowles’ story – and, of course, it’s Liza Minelli’s film. Here, Sally (Kara Lily Hayworth) has to share the limelight with two other leads: Emcee (John Partridge) and Fräulein Schneider (Anita Harris). It’s New Year’s Eve, a breath away from 1931; we’re in Berlin – and American wannabe novelist, Cliff (Charles Hagerty), is seeking inspiration.  At the train station, he meets the charming, erudite Ernst Ludwig (Nick Tizzard), who recommends Fräulein Schneider’s boarding house, and arranges to meet him at the bawdy Kit Kat Club, where English Sally is a dancer. It’s an intoxicating, hedonistic place,  but – even within these walls – the creeping march of Nazism cannot be avoided forever…

The choreography (by Javier de Frutos) is stunning: sexy, vibrant, funny and spectacular. Indeed, in the first act, the big number club scenes almost eclipse the story. Standout routines include the lewdly hilarious Two Ladies and the unsettling Tomorrow Belongs to Me. The orchestra are integrated with the action, on an upper tier, visible when we’re in the Kit Kat Club, but otherwise behind a screen. This works well, implying that they’re employees of the club.

The relationship between Sally and Cliff seems a bit muted, which makes sense, I suppose, as – in this version – she’s only staying with him because she’s lost her job and has nowhere else to go. Of course, he’s gay and she’s not one for commitment, so it was never going to be a forever thing, but I would like to see a bit more spark. Otherwise, Hayworth makes a lovely Sally – all wit and vivacity, with a beautiful singing voice – and Hagerty does a decent job as Cliff.

The storyline between the elderly Fräulein Schneider and her beau, Herr Schulz (James Paterson), is particularly emotive, their tentative steps towards romance thwarted by anti-Semitism. Harris and Paterson are nicely understated in these roles: they show the fortitude of those who’ve learned not to expect much; they’ve already survived one war and lived through hyper-inflation. Their pragmatism is heartbreaking, and provides an interesting counterpoint to both Cliff’s naïve idealism and Sally’s determined ignorance.

The second act is more compelling than the first: by now, we care about the characters, and the Nazi undercurrent is getting stronger. Partridge’s Emcee is getting visibly more edgy, his playfulness takes on a desperate tone. And we watch, horrified, as it all unravels, waiting for the inevitable horror we know must come.

The final scene is awful in the truest sense; it’s a powerful set piece, exemplifying Rufus Norris’ directing prowess. I won’t describe it here, because I think its impact relies on some element of surprise; suffice to say, the applause is accompanied by a sense of unease, the usual whoops and cheers that follow a rumbustious musical take a little while to erupt. And it takes a craftsman to achieve that.