We’ve been devotees of Alison Skilbeck since 2017’s The Power Behind the Crone, so it’s a real pleasure to see her back at the Fringe after the uncertainty of the last couple of years. Mrs Roosevelt Flies to London is written and performed by Skilbeck, and directed by Lucy Skilbeck (no relation).

The title pretty much sums up what this monologue is about: the famous First Lady’s account of her dangerous journey to England’s capital in 1942. But the play opens twenty years after that, at the time of the Cuban Missile Crisis, with Eleanor fast approaching the end of her life and asking herself if the world is about to end in nuclear annihilation. Has all her hard work been for nothing?

Then we are whisked back down the years to her preparations for the trip, and we’re given insights into the various characters who surround her: the famous husband she loved and who secretly betrayed her; his controlling mother; the female journalist who became her best friend (and, as the gossips of the time suggested, her lover).

And then she’s off on her whirlwind tour, where she encounters an assortment of different characters, all of whom the actor inhabits with absolute authority, switching from one to the next as effortlessly as she puts on and takes off Eleanor’s famous feathered hat. Her brief impersonation of Churchill is an object lesson. Many actors would venture into the realms of caricature, but Skilbeck nails it perfectly. She’s an associate teacher at RADA, and it’s easy to see why.

I leave the show feeling I’ve had insights into Eleanor Roosevelt’s life that I wouldn’t have got from simply reading a biography about her. But it never feels like a history lesson and it’s gratifying to note that, even early on a Tuesday morning, Skilbeck is performing to a sold out audience.

A Substitute For Life is an intriguing monologue, written by Simon Brett and performed by Tim Hardy. It’s the story of Francis Kenworthy, a man who has largely abandoned life in order to subsume himself in his greatest passion: books. When we enter the venue, we find him already seated at his desk, surrounded by his beloved tomes. The lights dim and, by candlelight, he tells us his story – about his passion for the work of Wilkie Collins, about his harsh upbringing at the hands of an uncaring father and a cruel governess. He tells us about his brother, who received all the attention, the one who was destined to be the heir, while Francis was merely the ‘spare.’ But of course, time has a habit of correcting the best-laid plans of controlling fathers and this is no exception.

There’s the feel of a Victorian ghost story about this production, though it doesn’t feature any supernatural happenings, unless of course, you include Hardy’s performance, which is absolutely spellbinding. As Kenworthy’s tale unfolds, the audience are drawn closer into his confidence and, despite the fact that he is not the most pleasant of characters, given to the kind of prejudices that were so prevalent at the time, still we fully empathise with his situation – which makes the story’s conclusion all the more powerful – and it would be unfair of me to reveal anything more than that.

Directed by Alison Skilbeck (Hardy’s wife, whose  Are There More of You? is showing in the same venue and with which this would make an excellent double bill), A Substitute For Life is an object lesson in how to deliver a monologue. It also leads me to remark on the way out, that it seems unfair to have so much talent in one family.

But talent there undoubtedly is, and you’ll find it in abundance at the Assembly Hall. 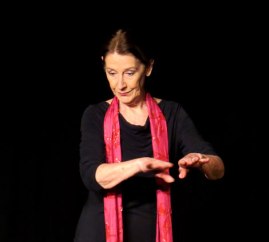 After last year’s The Power Behind the Crone (which we awarded an Edfest Theatre Bouquet), we know that Alison Skilbeck is a truly gifted player, and are keen to see her latest offering. Are There More of You? is another one-woman show, this time a series of four loosely connected monologues, and it’s a masterclass in character acting.

We first meet Claire, an ambassador’s wife, recently returned to the UK from Morocco. But their shared retirement plans have been scuppered by his revelation that he’s leaving her, and Claire is struggling to build a new life for herself.

Then there’s Sofia, who owns the trattoria down the road from Claire’s art class; she has big ambitions for the café’s future, but family problems keep getting in the way.

Sara is a “spirit weaver”, and she has a lot to say about the people that she treats. When her old school friend, Sam, a successful business woman, finds herself drunk and alone in Sofia’s trattoria, she sets aside her scepticism and calls on Sara for some spiritual healing.

Skilbeck segues between characters with almost indecent ease; she is a chameleon, transforming before our eyes. There’s not much in the way of props or costume to assist her: she simply adds a headband, shakes her hair loose, changes her jacket or puts on an apron. But her face sags or tightens, her jawline tenses, her lips purse, her shoulders drop, her hand gestures become expansive: she looks somehow completely different; each woman is distinct. Her voice changes too, from prim and clipped to a gravelly drawl, and it’s all so subtle, so nuanced, so precise – I am in awe. Every ambitious young actor at this Fringe should make a point of seeing Skilbeck’s show; it’s an object lesson – and a delight.

Her writing’s good too. There’s a Bennett-esque appeal to these four pieces: a gentle humour permeates throughout, and there’s warmth and fondness for the characters.

So, if you’ve an hour to spare one morning, why not head up to the Assembly Hall and watch this marvellous production? It really is something special.

Once again we have been wowed by some fantastic theatre this year. Here, in order of viewing (and with the benefit of hindsight), are our favourite productions of 2017. 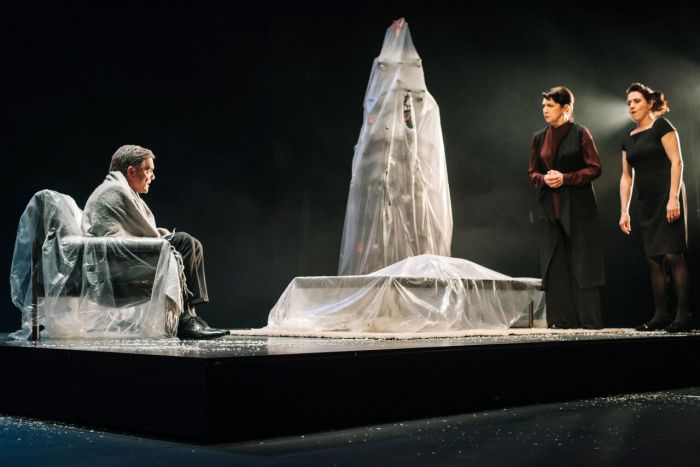 This thrilling, modern-day version of Shakespeare’s play was dynamic and audacious – with the whole fourth act recast in Scots. We loved every minute of it, especially Maureen Beattie’s performance as Paulina.

The students from the Royal Conservatoire of Scotland thrilled the audience with a skilful display of all things theatrical. We loved the sophisticated choreography (often incorporating the real time use of video cameras) and choral singing that sent chills down our spines.

This superb production of Jessica Swales’ Olivier Award-winning comedy was a delight in just about every respect. From the superbly realised set, through to the opulent costumes and the lively period music, this was fabulous to behold.

It was the direction that made this production so good: Abigail Graham did a wonderful job of clarifying everybody’s pain. And Nicholas Woodeson was perfect for the lead role, conveying Willy’s struggle with warmth and vitality.

The Toxic Avenger – Pleasance One, Edinburgh

A musical in the same vein that made Little Shop of Horrors such a pleasure, The Toxic Avenger was an unqualified delight, romping happily along powered by its own exuberance and the efforts of a stellar cast, who gave this everything they had – and then some.

The Power Behind the Crone – Assembly George Square, Edinburgh 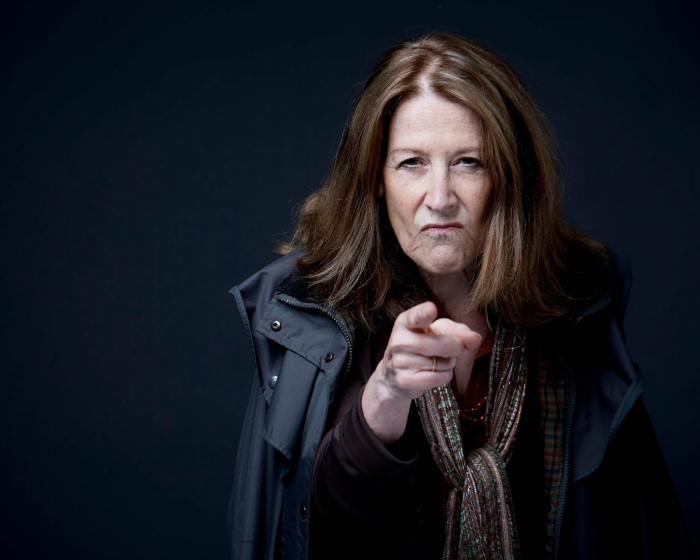 This was a wonderful piece of theatre, an exemplar of a Fringe show: beautifully scripted, and acted with precision and panache. Alison Skilbeck had absolute control of the material and created an impressive range of distinct, believable characters. 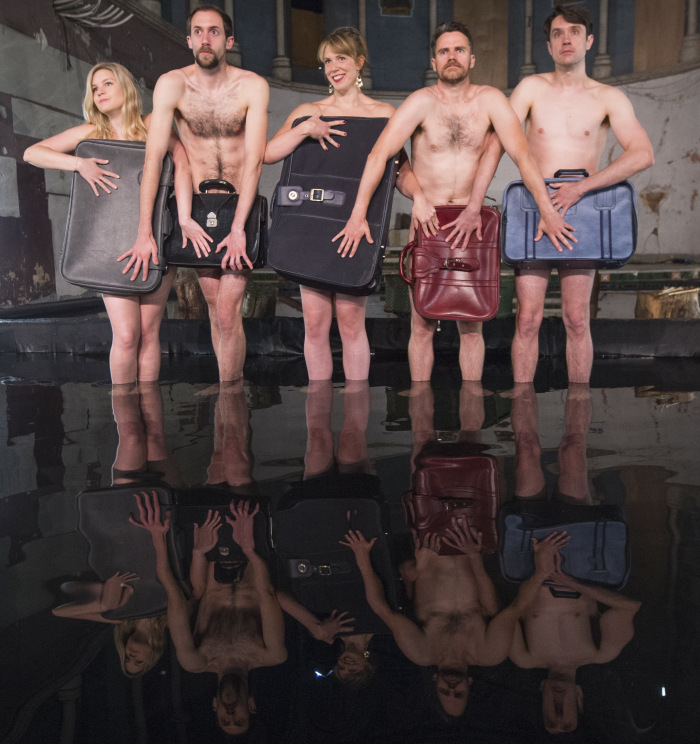 This was the most ambitious, exhilarating piece of theatre we saw this year. Site-specific productions – when the site is as spectacular and relevant as this (we were in an abandoned church, which had been flooded with forty-five tons of water) – can be truly exciting, and this one had a lot to offer. 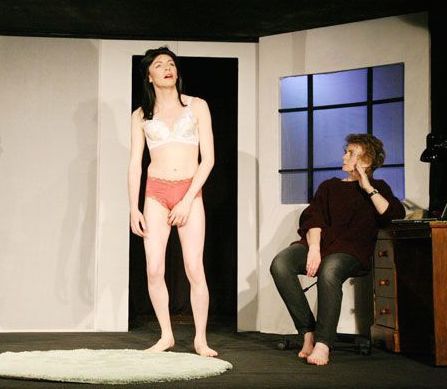 Safe Place provided a sensitive, insightful examination of the uneasy relationship between trans-activism and feminism. It asked (and answered) many questions, all within the framework of a nuanced and intelligent play. 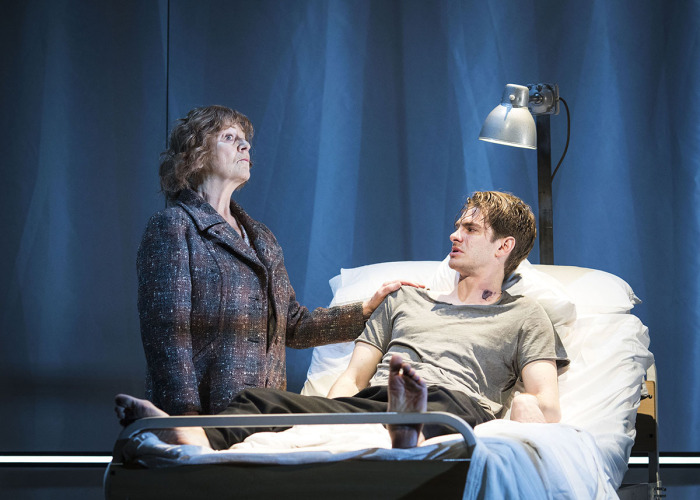 Clocking in at just under eight hours, Tony Kushner’s play offered us a “gay fantasia on national themes” – a sprawling, painful and searingly funny depiction of New York in the 1980s, fractured and ill-prepared to deal with the AIDS epidemic. A truly iconic piece of theatre. 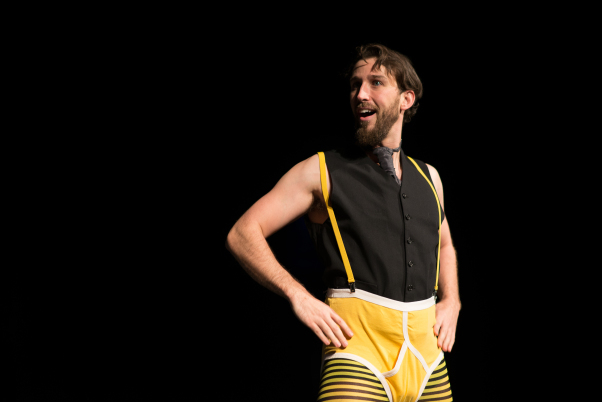 Merely Theatre gave us some ‘stripped-back’ Shakespeare, performing Twelfth Night and Romeo & Juliet in rep. The plays featured only five actors and the casting was gender-blind. It all made for an interesting dynamic and prompted us to re-examine familiar scenes. 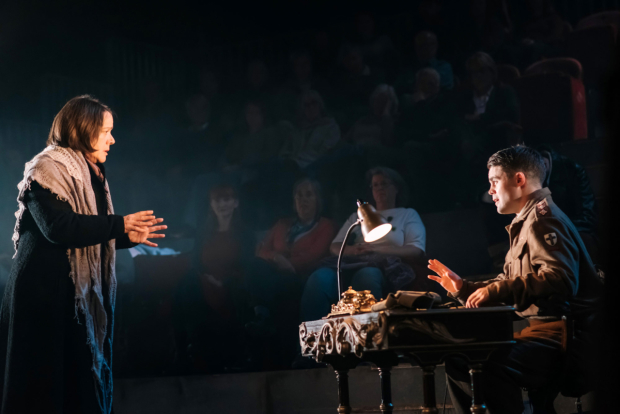 Cockpit was a witty, clever play, which saw the Lyceum transformed into a truly immersive space.  Director Wils Wilson served up a fascinating piece of theatre: arresting, thought-provoking, provocative and demanding – and it kept us talking for hours afterwards.

We never thought a pantomime would feature in any ‘best of’ list of ours but, for the second year running, the King’s Theatre’s stalwarts managed to wow us. Allan Stewart, Andy Gray and Grant Stott knew exactly how to work their audience, and the special effects were truly spectacular.

It was another fantastic three weeks at the Fringe for us. We crammed in as many shows as we possibly could – and still barely managed to scratch the surface. Here’s our pick of the best we saw this year. Congratulations to everyone mentioned.

The Power Behind the Crone – Alison Skilbeck

The Darkness of Robins – John Robins

These Trees the Autumn Leaves Alone – Will Greenway

The Man on the Moor – Max Dickins 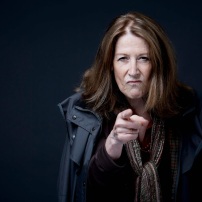 The Power Behind the Crone is a wonderful piece of theatre, an exemplar of a Fringe show: perfectly suited to its space and time-slot, beautifully scripted, and acted with precision and panache. In case I haven’t made myself clear: I liked it. A lot.

Alison Skilbeck plays Professor Artemis Turret, a Shakespearean scholar, delivering a lecture to a group of mature students (that’s us). The topic is a refutation of the dictum,’There are no good parts in Shakespeare for older women’ and the big draw is Artemis’s old friend, Dame Bunti Smart, an internationally acclaimed actress, who is supposed to be performing the illustrative speeches. But, not for the first time it seems, Bunti lets Artemis down, and the Professor is forced to play the parts herself. Reluctant at first, she throws herself into the performances, unearthing her own talent in the process.

Skilbeck’s delivery is flawless. From the Grenfell-like humour of the Professor to the pride of Paulina, from the bitterness of Queen Margaret to the bawdiness of Mistress Quickly, Skilbeck has absolute control of the material and creates distinct, believable characters. It’s fascinating: the fictional lecture serves the same function as an actual lecture, albeit the most engaging one I’ve ever sat through. I’m learning as I watch; plays I know well are re-positioned, the older women highlighted.