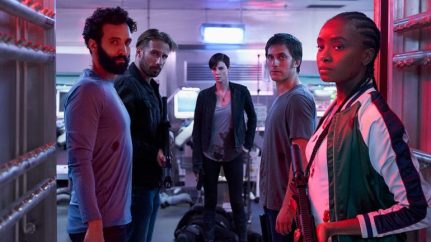 Charlize Theron’s steady advance into the realms of the action hero continues apace with this Netflix Original, directed by Gina Prince-Bythewood and based – unsurprisingly – on a comic book by Greg Rucka. Theron plays ‘Andy’ (or Andromadache of Scythia, if you want to be more formal about it), a centuries-old warrior princess. She’s the leader of a group of immortals who spend their spare time as mercenaries, jetting off to the world’s war zones to offer help to those who need it – kicking much ass as they do so.

The team also features Booker (Matthias Schoenarts), Joe (Marwan Kenzari) and Nicky (Luca Marinelli), characters Andy has encountered at various points across the world’s turbulent history, none of whom has much of a backstory – or at least not that the writer has bothered to share with us. When the team’s latest mission turns out to be a double cross, they quickly realise that somebody wants to capture them, and it becomes clear that CIA operative, Copley (Chiwetel  Ejiofor in a rather thankless role), is a key player in this operation.

Meanwhile, young GI, Nile (Kiki Layne), is wondering why a supposedly fatal injury she’s recently acquired in the line of duty hasn’t finished her off. Could it be that she’s the next new recruit for Andy’s team? Sure enough, Andy is soon showing her the ropes…

To be fair, The Old Guard isn’t the total debacle that many reviews have labelled it. It’s hokum, for sure, but it’s niftily directed hokum, which features several developments you don’t often see in a mainstream punch ’em up. Women are placed at the forefront of the action, for instance, while Joe and Nicky are lovers and proud to declare the fact to anyone who’ll listen.

But the story doesn’t always convince. We’re told that members of the team are immortal until ‘it’s time to die,’ which seems to be a case of having your cake and eating it – while Copley’s actions are frankly incomprehensible, lauding Andy and her crew in one breath and ratting them out in the next. His involvement with ruthless scientist and all-round bad egg, Merrick (Harry Melling), is unconvincing to say the least. What exactly are his motives?

Still, this is sprightly enough to pass a couple of hours with ease –  even if the obvious attempt to set this up as the first in a series is a tad optimistic.