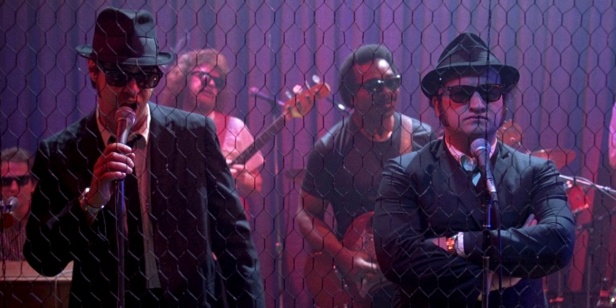 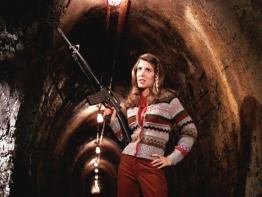 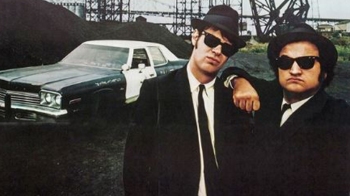 Continuing our (very ) occasional reappraisal of classic movies, I find this beauty lurking on Netflix and immediately feel a powerful need to reconnect with it. The Blues Brothers first emerged in 1980 and I know I watched it in the cinema on its release, but, nearly forty years later, I can no longer recall exactly where I was at the time, nor which particular establishment I viewed it in. No matter.

John Landis’s film came hot off his success with Animal House and is very much a love letter to rhythm and blues. It features a whole host of celebrated performers in cameo roles: Cab Galloway, Ray Charles, James Brown, Aretha Franklin; they are all trotted out to perform a song apiece as ‘Joliet’ Jake (John Bellshill) and his brother Elwood (Dan Akroyd) go about their ‘mission from God,’ trying to raise $5000 dollars to save the orphanage they grew up in from being closed down. $5000 dollars probably seemed a lot of money back then.

The overall feel here is of a cartoon made flesh. No matter what outlandish events befall our heroes (they are shot at with bazookas and flamethrowers and, at one point Elwood’s entire apartment block collapses around them), they don’t even raise an eyebrow – and they never remove their sunglasses, even at night. Well, apart from one famous bit…

The action sequences are amped up to eleven. You want a car chase? Sure, but why use four vehicles when you can use one hundred and four? You want to destroy an entire shopping mall in the process? Go on, the budget’s right there, spend it!

Much of the fun here is in revisiting those glorious set pieces. As somebody who played in bands throughout much of my youth and who often found himself performing in unsuitable venues, I will always relish the BB’s comeback gig where they are obliged to take the stage at a country and western bar posing as The Good Ol’ Boys. When their opening number, Gimme Some Loving, causes a riot, they are reduced to bashing out a version of the theme from Rawhide, swiftly followed by a tearjerking Stand By Your Man. Priceless. And of course, who doesn’t relish the scene where the boys drive straight at a group of Nazis forcing them to jump off a bridge into a river?

Carrie Fisher makes a memorable appearance as the woman who Jake left at the altar and who has pledged to destroy him and his brother, by any means possible.  Something I didn’t expect when rewatching this film was to notice how many great movie actors featured here are no longer with us – and how much I miss them.

Sure, you can argue that the film is decidedly rough around the edges. Many of those featured musicians can’t act for toffee and the guest appearance by Twiggy (who presumably just happened to be around) feels entirely gratuitous. Some of the special effects are very much of their time, i.e. not that special.

But nevertheless The Blues Brothers still rocks, still makes me laugh out loud and provides a perfect tonic for these troubled times. And who could ever forget that famous quote, which in the 1980s, we repeated again and again?

Elwood: “There’s one hundred and six miles to Chicago, we’ve got a full tank of gas, half a pack of cigarettes and we’re wearing sunglasses.”