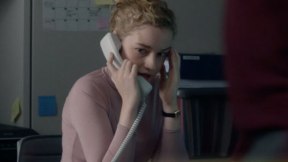 Writer/director Kitty Green’s The Assistant is a quietly troubling movie, a queasily believable insight into the machinations of the film industry, where venerated individuals are afforded too much power.

Julia Garner is Jane, a high-flying graduate who aspires to become a producer. For now, she’s stuck in an entry-level post, a lowly assistant to a movie mogul. Her duties include making coffee, photocopying, and removing evidence of his excesses. She throws away used syringes, wipes white powder off his desk, returns a stray earring to his lover, babysits his children and placates his crying wife. Her colleagues collude; they’re all fully versed in the kind of apologetic email she should send in response to being screamed at by the un-named boss, and a meeting with HR manager, Wilcock (Matthew Macfadyen) – sought because of Jane’s concern for a ‘very young’ and naïve new recruit – reveals the unsurprising fact that there’s absolutely no support available. There are four hundred other people waiting to take her job, Wilcock tells Jane. She needs to put up and shut up – or she’s out.

The cleverness here is all in the understatement. We see how tedious and soul-destroying Jane’s role is: the brutal pre-dawn commute, the punishingly long hours, the personal nature of much of what she’s asked to do. She orders lunch for the whole office but doesn’t get a break herself; indeed, we’re always aware of how hungry she is, never managing more than a single bite of anything she tries to eat. Garner conveys Jane’s anxiety and brittle desperation most eloquently, despite  saying very little. We can feel her gritting her teeth, determining to get through this phase so that she can, eventually, have the career she wants. What’s less clear is whether she’ll be able to endure, and, if she does, what she will lose in the process.

The movie is claustrophobic and tense; there is little action but much revelation. I like that we never see the boss. His absence makes him universal – not a capricious individual who needs to be replaced, but a symbol of a rotten system that’s ripe for revolution.

And the Janes are starting to speak out.