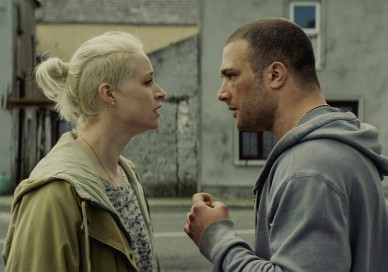 There’s something of the young Marlon Brandon in Cosmo Jarvis’s performance in Calm With Horses; indeed, there are plot similarities here that make this feel like a West of Ireland homage to On The Waterfront. But that doesn’t detract from the film’s power, nor the intensity of the performances.

Jarvis plays ‘Arm,’ a promising boxer in his youth, whose career hit the skids when he accidentally killed an opponent in the ring. Now he’s reduced to being the hired muscle for the Devers clan, a family of criminals who hold sway over the town where he lives. Arm is accompanied by his minder, Dympna (Barry Keoghan), who is the nephew of Hector (David Wilmot), the gang’s head honcho. Dympna is desperate to prove his worth and seems capable of making Arm do pretty much anything, no matter how brutal, usually by getting him drunk and stoned beforehand. It’s clear though, that Arm is basically a decent bloke who’s taken a wrong turn back in the day.

He has a son, Jack, with his former partner, Ursula (Niamh Algar), but the boy is severely autistic, only really happy when he’s riding a horse (hence the title). Ursula wants to move Jack to Cork, where there are specialised schools that can help him, and she asks Arm for financial help, but Dympna manages to dissuade him; he has another job for Arm, one that requires him to more than just beat somebody up…

Nick Roland’s debut picture, with a screenplay by Joe Murtagh, is set in those parts of the West of Ireland where tourists would fear to tread – indeed, a visit to Paudi (Ned Dennehy)’s garage is not for the faint-hearted. It’s not just sides of beef he has hanging in that outbuilding. This is mostly Jarvis’s film, though Keoghan once again displays his uncanny knack of choosing the right role at the right  time, and Dennehy’s smirking, scowling performance shows why his is one of the most familiar faces in Irish cinema.

If there’s a certain inevitability to the story’s ending, it’s more than compensated for by the film’s raw power and those memorable characterisations. Those looking for a charming, lyrical tale of simple country folk may wish to look elsewhere.