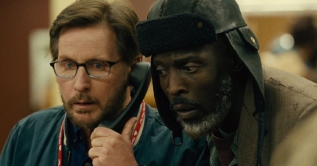 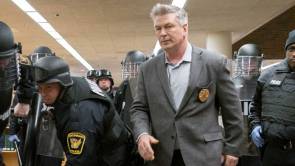 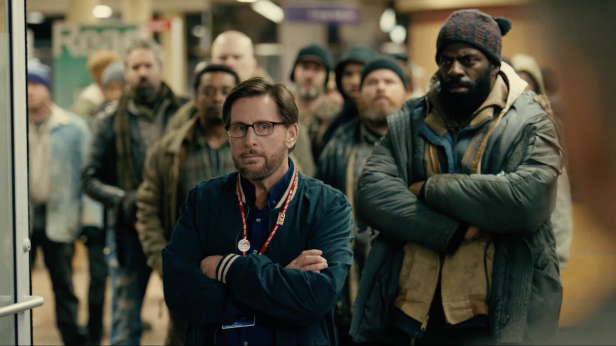 It’s probably a sign of the times when one-time movie brat and teen heart-throb, Emilio Estevez appears in a film playing – of all things – a librarian. Mind you, it’s clear from the outset that his character, Stuart Goodson, has hidden depths, not to mention a colourful past. And his tryst with kooky neighbour, Angela (Taylor Schilling), is enough to convince us that he knows how to party.

In The Public, he’s a long-serving worker at the Cincinnati Public Library, liked and trusted by his colleagues, his boss, Mr Anderson (Jeffrey Wright), and the legions of unemployed and homeless people who regard the place as an all-important refuge. They come here on a daily basis to get warm and dry, to educate themselves and to meet up with friends from across the city.

It’s one of the coldest winters on record and the city just doesn’t have enough shelters to ensure everyone has a bed for the night. Homeless man, Jackson (Michael Kenneth Williams), knows he is unlikely to survive another night sleeping on the streets, he instigates an occupation of the library, and Goodson doesn’t exactly do his utmost to dissuade him from the notion. Pretty soon, the library is in lockdown, packed with destitute people, and the forces of law and order are called in to solve the situation. Key amongst the latter are heinous public prosecutor (and would-be Mayor) Josh Davis (Christian Slater) and experienced police negotiator Bill Ramstead (Alec Baldwin). And Bill has his own reasons for wanting to study the faces of the occupiers.

Written and directed by Estevez, The Public is an immensely likeable movie that strangely enough, has some things in common with John Hughes’ The Breakfast Club: a bunch of likeable misfits who find themselves trapped in a library under the baleful glare of authority. Sound familiar?

Davis is an interesting character and, if some of the others are less convincingly drawn (we really don’t find out enough about Ramstead and the situation with his runaway son), this is an enjoyable watch. The political messages occasionally verge on the naive; nonetheless, they are well-intentioned – and I love a narrative that repeatedly drives home the message that public libraries are a valuable and much-neglected resource, and richly deserve all the funding that can be thrown at them.

As somebody who regularly avails himself of the services of a public library (or at least, somebody who used to), this has me longing to be back in those quiet reflective spaces. Until such things are possible once more, The Public will have to suffice.