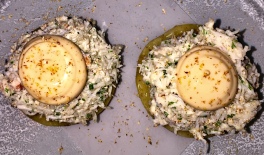 It’s almost Valentine’s day and Ondine has been on our ‘go to’ list for quite a while. (And by the way, we haven’t got the date wrong, it’s just that we never go out to eat on February the 14th, when every restaurant is packed to the rafters and standards inevitably suffer.)

We’ve read good things about Ondine, though – mostly from Jay Rayner, who says that he always eats here whenever he’s in Edinburgh. So we decide to act on his advice and here we sit in the calm, spacious dining area, sipping glasses of Sauvignon Blanc and all ready for a gastronomic blitzkreig. We’re brought a couple of slices of good wholemeal bread to keep us going and there are cod balls as an amuse bouche, although they are a little too redolent of the deep fat fryer for my liking.

The starters are reassuring though: a light and citrusy baked brown crab, with cheddar crumb, served on miniature crumpets, which manages to taste a whole lot better than it looks (like a pair of demented eyeballs). There’s also a delicious treacle-cured salmon, with horseradish sauce, though the chunk of treacle bread that accompanies it isn’t quite as fresh as I want it to be.

For the main course, there’s a generously sized chunk of roasted halibut with creamed potato; the fish is perfectly cooked, soft, flakey and pleasingly charred. There’s also a half lobster with fine herbs and butter sauce. The latter is accompanied by a small helping of triple cooked chips and there’s also a side dish of creamed spinach, the latter served disagreeably cold.

And, oh dear, is there any other meal that’s quite as disappointing as lobster? It squats on your plate, looking like something from the late jurassic period and you’re provided with a set of metal tools that wouldn’t seem out of place on a medieval torturer’s bench. You set about the creature with much gusto, scattering fragments in every direction but it all comes down to a couple of spoonfuls of (admittedly delicious) flesh, after which you’re reduced to searching disconsolately through the debris in search of a few more scraps of anything edible.

(This isn’t a criticism of the restaurant, by the way, but of the very nature of lobster itself. So much effort for so little return. Ah well…)

For puddings we have a treacle tart served with a scoop of ice cream – actually, we can’t help noticing that it’s half a treacle tart, which niggles a little when the price is eight pounds – and there’s a light, tangy rhubarb and custard dessert, encased in soft meringue. Both of these are nice enough, but somehow fail to deliver the triumphant knockout punch that we are hoping for.

It’s been a perfectly agreeable evening, and the food is mostly good, even if some of the details could be improved upon. I can’t help wondering what Mr Rayner sees in this place that I’m missing. Unlike him, I won’t be in a great hurry to return.