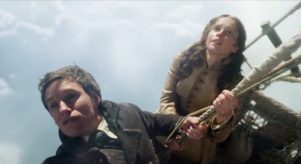 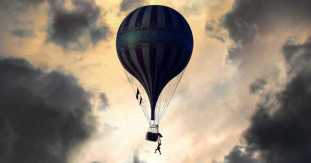 This ‘inspired by a true story’ film is pitched as a family-friendly affair in the trailer, but actually plays more like a hair-raising tale of (literally) high adventure. It’s based around a genuine hot air balloon ascent made in 1862 by two men, but here, one of the men has been replaced by fictional female balloonist, Amelia Rennes (Felicity Jones). It has to be said that her character is one of the best elements in this production and anyway, women have been callously written out of the history books so often, it’s actually refreshing to witness one actually being written into it.

Meteorologist James Glaisher (Eddie Redmayne) has a burning ambition to venture higher than any man has done before, mainly because he fervently believes it will advance the fledgling science of weather prediction. Glaisher seeks out ‘the widow Rennes,’ a woman still in mourning for her husband, who died in an earlier balloon ascent. He somehow manages to persuade her to be his pilot, though he is quietly appalled by all the carnival razzmatazz she brings to the public launch.

Once up in the air, the film settles into a series of alarming and genuinely vertiginous escapades as the duo battle storms, winds and freezing temperatures. There are some stunning ariel shots and occasional flashbacks to the couple’s respective stories – Glaisher trying to come to terms with the advancing senility that is overtaking his father, Arthur (Tom Courtenay), and Rennes dwelling on that earlier ascent which cost her so dearly. While the action scenes are enough to put me right on the edge of my seat, the flashbacks are rather less successful and I’m particularly disappointed to see brilliant character actors like Anne Reid and Tim McInnery given so little to do.

A couple of questions I can’t help but ponder after seeing this. When balloonists throw stuff out of the gondola in order to ‘lose weight,’ what happens to those unfortunates who happen to be wandering around thousands of feet below them? And, if Glaisher went through such hell advancing the science of weather prediction, why do I find myself walking to the cinema through a rainstorm that completely failed to show up on my weather app?

The Aeronauts is certainly worth seeing, not least for Jones’ delightfully gritty  performance in the lead role. But don’t expect to see the jolly, easygoing film promised by the trailer. This is made of sterner stuff and those who suffer from vertigo might just decide to give this one a wide berth.