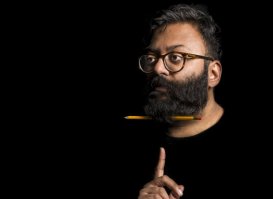 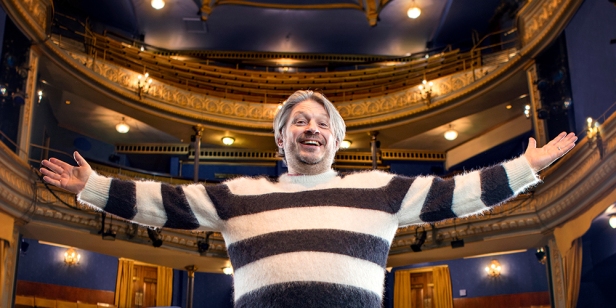 Let’s face it, it’s a pretty poor Fringe without some Richard Herring in it. His was the first show I saw on my first ever visit to the Fringe (Christ On a Bike; The Second Coming) and I’ve been a firm fan ever since. Okay, so this year, he hasn’t brought a new comedy show to Edinburgh, but he is doing daily recordings for his podcast, RHLSTP – and, as luck would have it, he’s talking to one of B&B’s friends, Malawian comedian, Daliso Chaponda. Win win.

RHLSTP is a regular thing in our lives these days, and it’s fascinating to watch a recording and know that we’ll be listening back to it on our phones in a day or so. The New Town Theatre is rammed today. (The last act we caught here? Er… Jeremy Corbyn.) It’s a Saturday and, come to think of it, we’ve never seen the Fringe quite as busy as it is right now. The streets are so bustling, it’s hard even getting to the venue.

A somewhat slimmer Richard Herring resides on an ornate wooden throne, fitting for the self-styled ‘King of the Fringe.’ First up is comedian Sunil Patel, a charming and laid back chap, whose show, White Knight (he says he regrets that title), is showing daily at 2.30pm at the Pleasance Courtyard (Bunker). He looks somewhat nonplussed by his Emergency Question. What would it take to persuade him to fellate the actor Keith Allen? Hmm. Answer: A trip to Japan. Okay.

But its Daliso we’re really here to see, particularly after catching his fascinating and challenging show Blah Blah Blacklist at The Teviot Wine Bar (6.30pm daily). Here’s a link to our earlier review:  https://bouquetsbrickbatsreviews.com/2019/08/14/daliso-chaponda-blah-blah-blacklist/

As RHLSTP is a podcast featuring interviews with (mostly) comedians, there are different interviewees every day, so be sure to check the schedule carefully before booking. Daliso makes a perfect match for Richard’s easygoing interviewing technique, delving into his influences and, I’m sure, winning over a lot of new fans in the process. His best Emergency Question? What artefact from any museum would he like to keep? Daliso chooses the Liverpool Museum of Slavery and opts for…  a Ku Klux Klan uniform. Unexpected, to say the very least. To find out why, you’ll have to listen when the podcast…

So, go catch RHLSTP. You’ll have a whale of a time. And it’s funnier than Mr Corbyn.