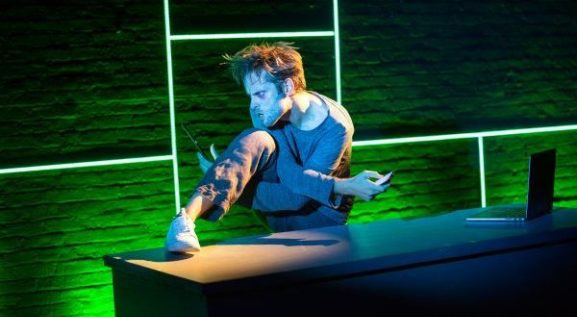 Physical comedy is one of the hardest things to pull off successfully. Because its practitioners sometimes make it look ridiculously easy, we’re sometimes fooled into thinking that it actually is; but it only takes a few moments in the company of a gifted mime artist to appreciate how rigorously they have trained themselves to reach such levels of perfection. New York-based performer Richard Saudek is a brilliant exponent of the form. And today, in a very hot enclosed space on the Edinburgh Fringe, it certainly doesn’t look easy. The sweat is literally raining from him as he manipulates his face and body into a whole range of frantic contortions.

In Beep Boop, Saudek plays a man addicted to his own technology: his phone, his tablet, his laptop; he cannot seem to tear himself away from them. Locked up in his apartment, he appears to have lost the skill of maintaining a genuine friendship. A knock on the door is treated with open hostility. The voice of a woman offering beauty tips online is the closest he ever gets to a conversation. He cannot even make a meal without photographing it, sharing it online and then dumping it in the bin.

This is a hard act to review, simply because every move, every gesture, tells us something new about this man’s tortured character. Aided only by a series of sound effects -provided by a po-faced female assistant – Saudek flings himself through a series of manic vaudevillian twists as his beloved devices subsume him, affect him and ultimately attempt to destroy him. And if I’m in danger of making the whole thing sound a bit on the grim side, don’t be misled. This is brilliantly, howlingly funny stuff. Saudek’s range of facial expressions alone are enough to have me in stitches.

Weirdly, for me, much of the humour comes from recognising myself in this weird mix. Saudek’s character exhibits traits that are uncomfortably familiar – and in a way, that’s the real strength of what he accomplishes here. It’s like looking at yourself in a funfair mirror.

If you like mime and physical theatre, then don’t miss this show. You’ll be in for a treat.