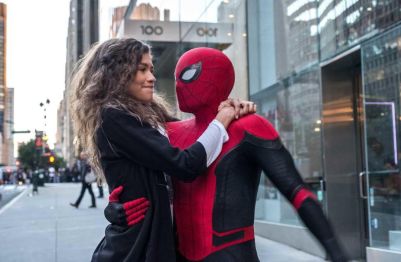 I’ve never been the biggest fan of superhero movies, but out of the pantheon of comic book contenders, Spidey was always my go-to. I read the comics as a teenager, even sent fan letters to Stan Lee at The Bullpen – and I was delighted when, in 2017, Spider-Man: Homecoming finally gave the world a Peter Parker that looked the right age.

If Far From Home isn’t quite the slice of perfection that its predecessor was, it’s nonetheless hugely enjoyable – and somehow, I feel happier with a spandex-clad character who is actually aimed at a teenage audience, rather than grown-ups attempting to relive their time in the sun.

It’s eight years since the events of Avengers: End Game, and the  survivors are coming to terms with the event that they now refer to simply as ‘The Blip.’ Peter Parker (Tom Holland) is in dire need of a little R & R and is fully expecting to find some on his upcoming school trip to Europe. He also plans to tell MJ (Zendaya) exactly how he feels about her, preferably in the most romantic location possible. But Nick Fury (Samuel L. Jackson) has other ideas. Now that Spider-Man is a member of The Avengers, he argues, it’s time to step up to the plate and fulfil the promise that Tony Stark saw in him.

Peter keeps his head down and goes on holiday with his schoolmates but, on the first leg of the tour – in Venice – the city is attacked by a gigantic beast made of water. This is one of The Elementals, weird creatures that have come from an alternative reality. Luckily, another superhero pops up to handle the situation. He is Quentin Beck (Jake Gyllenhaal), quickly dubbed ‘Mysterio’ by the local press. Beck tells Peter how The Elementals destroyed his family and he and Peter quickly become friends… but as Peter’s school travel from one picture-postcard location to the next, trouble follows them with a vengeance.

For the first third of this movie, I feel that it lacks a credible villain, but then I realise I’ve been sucker-punched and, after that, everything falls satisfyingly into place. Refreshingly, this is, at heart, a teen movie, with all the tropes you’d expect in that genre. There’s funny interplay between Peter and his best friend, Ned (Jacob Batalon); Zendaya’s MJ is a delight, light years away from the usual suppliant females beloved of this genre; and there’s a delightful subplot featuring a budding romance between Aunt May (Marisa Tomei) and Happy (Jon Favreau).  Even the climactic CGI punch-up feels fresher and more innovative than most of the competition, with one sequence bordering on the psychedelic.

In the end, I am thoroughly won over and very entertained.

Of course, we all know by now to stay in our seats for the post-credit scenes. There are two on offer here and both of them contain some pretty startling stuff.