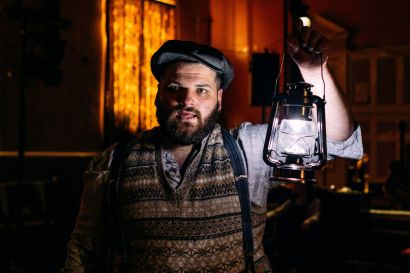 549: Scots of the Spanish Civil War isn’t exactly what you’d call subtle: in a small pub in Prestonpans, the parallels between four disgruntled millennials and their 1936 counterparts are explicitly drawn.

The 2017 quartet are somewhat disaffected, ground down by austerity and disillusioned with democracy. George (Robbie Gordon), who was famed at school for being the political one, isn’t going to bother voting in the next election. What’s the point? The others disagree, but that doesn’t mean they’re of one mind. They’re angry, polarised; either silent or shouting; held together only by proximity and a shared past.

But, during a powercut, Old George (Michael Mackenzie) appears briefly and then  vanishes, leaving behind a mysterious suitcase. Bar manager Ellen (Rebekah Lumsden) seizes the opportunity to school the boys, telling them that Old George is long dead, and that his suitcase contains mementoes of his time fighting in the Spanish Civil War.

George Watters joins the legendary International Brigade in 1936, spurred on by his deeply held belief that fascism must be thwarted, no matter what the cost. He persuades his mates and his brother-in-law too: Jock (Josh Whitelaw) is keen because he wants to spread his wings, to see the world beyond East Lothian; Bill (Cristian Ortega) is an innocent, young and easily swayed, who just wants to meet some Spanish girls; Jimmy (Nicholas Ralph) is in it for the money. Their ideologies differ, but they bond over the fight.

As Ellen tells the story, the men enact it, using whatever they can find in the bar to represent the tale. Their guns are snooker cues; their barriers bar tables. The lighting (by Benny Goodman) is unusual and most effective: there are banks of brightly coloured pink and yellow spots, almost blinding at times, denoting the present day, while an atmospheric orange gloom settles over much of the past action. It’s a quirky palette, but somehow it makes perfect sense.

The physicality of the drama is excellent, with some inventive set pieces, particularly the bike ride and the battles. The small space feels crowded by soldiers; the pace never lets up, and the characters are well drawn. This is true ensemble work, and very nicely done.

And, in a testament to the power of theatre, the simple reenactment of the tale has a profound impact on the boys, shaking them out of their torpor. I know, I said it wasn’t subtle. But this isn’t the place for subtlety. Maybe, in these troubling times, as the far right rears its head again, we all need to wake up and realise what’s worth fighting for.