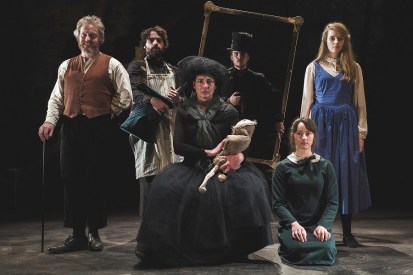 Alice in Wonderland is something of a phenomenon, famous more for its cast of extraordinary characters than for its storyline. Anyone who grew up reading English novels (or watching the films based on them) knows the Mad Hatter, the Queen of Hearts, Tweedle-dum and Tweedle-dee. Lewis Carroll’s 1865 creations are an illustrator’s dream; indeed, John Tenniel’s drawings are at least as powerful as the author’s words, and surely party responsible for propelling Alice to stardom. Responsible too, perhaps, for sidelining the protagonist, who slides into insignificance in many adaptations of the work.

And there are many adaptations of the work. I’m almost weary at the thought of seeing another one. I know the story well: I read both books as a child, and have seen countless stage and cinematic versions. I’ve even directed a school production – the Disney Junior one – so I’m well-versed in its lore.

Esteemed Irish theatre company, Blue Raincoat, are well-versed too: this is a revival of their own 1999 production, adapted by Jocelyn Clark. I didn’t see their original, so I can’t compare the two, but I can say that this interpretation is the closest I’ve seen to the novel, with young Alice (Miriam Needham) placed firmly centre-stage, her internal monologue brought to life by her older self (Hilary Bowen-Walsh)’s narration.

This is a shabby, degraded Wonderland, seen through the adult eyes of a jaded Alice. But the bold, frenetic, questing nature of the child is captured perfectly, as is the perplexity of growing up, where one minute she is like a little girl, the next too big for the confines of her world. The people and creatures this Alice meets are (rightly, I think) peripheral: she’s the hero of her own tale; they exist only insofar as they relate to her. Her intelligence and curiosity shine brightly in this production; she demands answers to everything, but is offered nothing satisfactory. Only when she takes charge and asserts herself is she able to wake up from the dream.

With such emphasis on Alice, it’s safe to say that this is an intense piece of theatre, with both Needham and Bowen-Walsh surely pushing themselves to exhaustion. But the supporting cast are strong as well; the portrayal of the Duchess (Sandra O’Malley) is particularly interesting, especially as her baby morphs into a pig.

The set design (by Paul McDonnell) is ingenious: adult Alice’s basement transformed into Wonderland, all broken picture frames and stepladders and old bits of wood, and (of course) a series of different-sized tables used to great effect.

Under  Niall Henry’s frantic, physically-focused direction, this show is something of a tour de force.  Not a new take, exactly, but certainly a refreshing one.