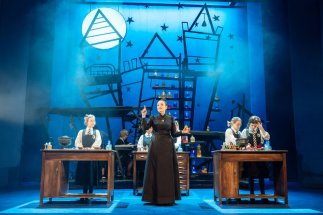 Jill Murphy’s Worst Witch has surely earned a place on the ‘children’s classic’ list by now? First conjured into print in 1974, Mildred Hubble has been casting her spell over children for nearly five decades, with film, television and now stage adaptations all helping to extend her reach. Her guileless exuberance and gauche clumsiness are a heady mixture; she’s a relatable heroine – her fallibility as important as her courage and warm heart.

This production, adapted by Emma Reeves and directed by Theresa Heskins, has much to commend it. It’s a sprightly dash through key elements of the eight novels – focusing on Mildred’s breathless arrival at the school and the countless scrapes she gets into – and there’s enough energy and zeal here to keep even the youngest audience members engaged.

The conceit is that the students of Miss Cackle’s Academy for Witches are putting on a play, written by fifth-former Mildred (Danielle Bird) about her early days at the school. The metadrama allows for some deliciously lo-tech creativity, and the school-show-style solutions with their implicitly small budget are both charming and effective. I like the silliness of the blue blankets to denote invisibility, for example, and the broomstick-swings for the ill-fated flying display. The sock-puppet cats are also a delight: a daft idea that works remarkably well.

The characters are nicely drawn. These are adults playing children, but it doesn’t feel too much of a stretch. The structure means that they’re supposed to be sixteen, after all, playing at being their younger selves. Rosie Abraham stands out as uber-snob Ethel: her smug demeanour is perfectly portrayed, and funny rather than threatening. Bird is a suitably scatty and likeable Mildred, and Rachel Heaton’s embodiment of Miss Hardbroom is marvellous. The incorporation of Mildred’s classmates and teachers into the on-stage band is neatly done, with Miss Bat (Molly-Grace Cutler), Miss Drill (Megan Leigh Mason) and Fenella (Meg Forgan) rocking out convincingly. The first act is, well, first-rate.

I’m not so keen on the second act, where the action moves backstage. Despite a powerful performance from Polly Lister, the Miss Cackle/Evil-Twin Agatha sequence dominates to such an extent that it feels unbalanced; this is no longer Mildred’s tale. The transition from school play to ‘real life’ is a little fudged, and some of the children around us are confused, asking their parents to clarify. I like the sequins and campery, the panto-villain strutting and the body-swap routines, but the pyrotechnics and video projections just don’t work as well as the homespun stuff in the first half. They’re not magnificent enough to impress, and lack the bravura inventiveness of the earlier ideas.

Still, this is a fun piece of theatre, and well worth seeing. Mildred Hubble is a truly lovely character, and it’s easy to see why she has endured.