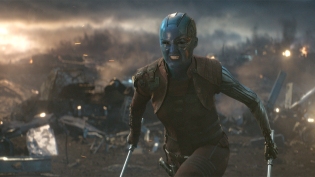 It’s pointless to try and give this one a body swerve. It lumbers over the cinematic horizon like a behemoth, gobbling up viewers and crushing box office records beneath its massive feet. Resistance is futile.

As one of the few reviewers who was distinctly underwhelmed by Infinity Wars, I still need to see how the Russo Brothers are going to extricate themselves from the corner they’ve seemingly painted themselves into. Oh, right… like that. Well, I guess it was the only way possible…

By the way, those of you who like to cry ‘plot spoiler!’ every time a tiny detail is revealed may want to think twice about reading the following two paragraphs. Just saying.

Endgame opens briefly on events shortly after Thanos (Josh Brolin) has made the most calamitous finger-snap in history. It then moves on five years to show the remaining Avengers trying to come to terms with what has happened to the world. Hawkeye (Jeremy Renner) is now a ruthless swordsmen, carving up Japanese gangsters with relish, whilst sporting a disastrous new haircut that makes him look like a disgruntled cockapoo. Captain America (Chris Evans) is attending therapy classes, but is still impossibly clean and healthy. Thor (Chris Hemsworth), on the other hand, has really let himself go and now sports hippie dreadlocks and a fearsome beer belly. Bruce Banner (Mark Ruffalo) has learned to manage his anger issues and is permanently trapped in his green, oversized alter ego, Hulk. And… well, so on.

Then, up pops Scott Lang (Paul Rudd) recently returned from imprisonment in the quantum realm. He brings along an idea that might just undo the Infinity Curse and return the world to where it was five years ago. So the Avengers assemble for one more mission.

OK, so my main beef with this is the same as it was with Infinity Wars, only even more so. There are just too many superheroes for comfort. The way things stand here, they seem to outnumber ordinary people, which can’t be right, surely? And you know, I, for one, am happier with those movies (like Shazam!, for instance) that know they are essentially kids’ film’s and feel no shame about it. Endgame, however, is for the most part so serious it hurts – it’s a great lumbering leviathan, creaking beneath the weight of its own self-importance. Happily, the po-faced stuff is leavened every so often by some much-needed humour, most of it coming from Hemsworth’s corner. (I love the fact that Thor never has to apologise for losing that gym-ready look and Hemsworth always has a cheeky glint in his eye that suggests he knows how ridiculous it all is but couldn’t care less.)

To give the Russo Brothers their due, this doesn’t really feel like a bum-numbing three-hour marathon. It’s action packed enough to allow the time to zip by and, if the script occasionally feels ridiculously over-complicated, well that’s just par for the course when you have an audience that picks so avidly over every little detail. And pick they will. Reports are that people are going back to watch the film over and over again.

Of course, as ever, we are presented with a great big climactic battle, made even more of an endurance test by the fact that the scriptwriters feel duty bound to include every single lead character from the preceding twenty-one movies in the Marvel EU. That’s an awful lot of spandex to take in. And then of course, once the punch up’s done and the dust has settled, there’s the little matter of tying up all those loose ends…

Look, the cinema going public has made its mind up on this, and who am I to say that they’re wrong? I can only speak for myself when I repeat the old mantra ‘less is more.’ Give me one superhero and one villain, and I’m a relatively happy bunny.

Endgame is undoubtedly a big movie, but maybe not in the way it thinks it is.