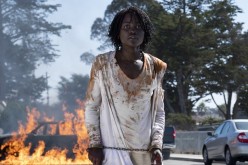 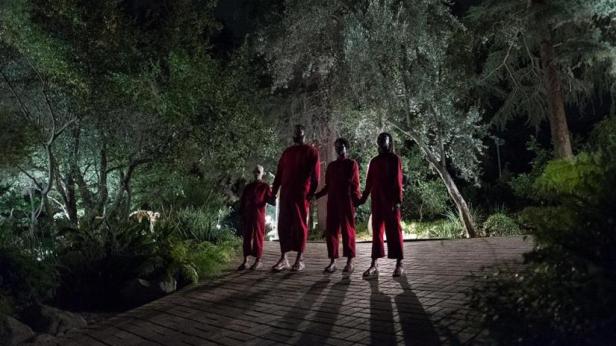 Jordan Peele’s directorial debut, Get Out, was an extraordinarily accomplished start to his filmmaking career – indeed, we chose it as one of our ‘best of 2017’ movies. Although Us has a few echoes of that film, it’s an altogether more complex and ambitious project, a powerful metaphor about American society (does Us actually stand for U.S? Could be…). This is about privilege and aspiration and good old-fashioned greed. If occasionally it feels as though Peele hasn’t quite got control of the plethora of issues he unearths here, it’s nevertheless an eminently watchable film.

The Wilsons are a likeable and clearly affluent family, who set off for a summer vacation at the beach resort where Adelaide (Lupita Nyong’o) used to go with her parents back in the day. Her affable husband, Gabe (Winston Duke), can’t wait to hit the beach and rent out a fancy powerboat, just like his even more wealthy friends, the Tylers (Elizabeth Moss and Tim Heidecker), with whom Gabe has a bit of an unspoken rivalry. The Wilson kids, Zora (Shahadi Wright Joseph), and her little brother, Jason (Evan Alex), are happy to be anywhere that has wifi and access to a mobile phone. But Adelaide is hiding a fearful secret. Back in 1986,  when she last visited the resort with her parents, she wandered into a beachside hall of mirrors, where she had a life changing experience…

The past soon makes its chilling presence felt with a night-time visitation by a mysterious family, who turn out to be warped doppelgängers of the Wilson’s themselves – and what was supposed to be a relaxing vacation turns all too quickly into a frenzied struggle for survival.

The first half hour of Us is brilliantly played, starting with subtle intimations of approaching disaster and leading very convincingly into a terrifying twist on the old ‘home invasion’ genre. But, as the story progresses and we begin to learn more about the Wilsons’ nightmarish visitors, we realise that we are in the midst of a raging allegory that attacks the tenets upon which much of middle-class America is founded, sending a warning to the current elite that there’s a whole underclass out there, casting envious eyes upon all those fancy possessions, and covertly drawing up plans to come and take their share.

There are, it has to be said, a few mis-steps here. The Tylers have little to do other than be obnoxious and serve as bloody victims of the new order – and, though I initially enjoy the jokey dialogue that sets up the Wilson family’s dynamic, I feel less comfortable when characters are still doing it in the midst of total carnage. Furthermore, the complex plot strands that explain the existence of the doppelgängers don’t always stand up to close scrutiny. On the plus side, Nyong’o’s performance as the tortured mother with a terrible secret to protect is really quite brilliant and, with a lesser talent in the lead role, this film wouldn’t fly nearly as successfully as it does.

In the end, this doesn’t really measure up to Get Out but there’s enough here to keep you hooked to the final frame, and – unlike many films in this genre – it also gives us plenty to think about afterwards.