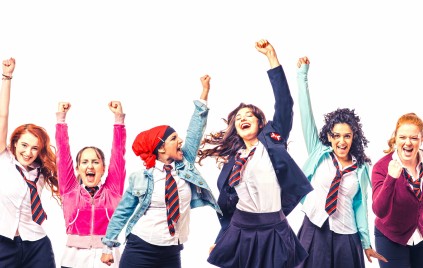 If you were told you were going to see a play about asylum seekers threatened with deportation, I doubt you’d imagine an exuberant production, but that’s exactly what Glasgow Girls is. A vibrant, pulsing, emotional whirl of a musical, with a vital message and a warm, fierce heart.

The girls in question are real: this piece, written by David Greig and directed by Cora Bissett, is based on their real struggles, their real lives.   They’re a disparate group, hailing from Somalia and Poland, Iraq and Kosovo, but they all end up in Glasgow’s Drumchapel High School. Here, they are brought together via Mr Girvan (Callum Cuthbertson)’s ESL class and, when Agnesa (Chiara Sparkes) – a Roma refugee from Kosovo – is threatened with deportation, they learn that the local community is on their side. As local matriarch, Noreen (Terry Neason), tells us, the working classes are often lazily depicted as racist or bigoted, but here the girls find true allies, prepared to pay far more than lip service to their cause.

The music makes sense: these are teenagers, as loud and demanding as they ought to be, with strong opinions and clear beliefs. If something’s wrong, they want to put it right. Theirs is, fundamentally, a simple tale. They are Scotland’s children now. And they are clearly shown here as more than just their troubled pasts, as more than numbers, more than problems, or outsiders. They’re people, with the same hopes and dreams as the rest of us, and surely – surely? – the same right to live good lives.

So of course they sing; of course they dance – why wouldn’t they? And the music complements the story well. There are upbeat, sassy, kick-ass songs and sombre ballads to temper them. The immigration officials’ robotic sequences are cleverly handled, and the voices are all commanding, bold as well as vulnerable.

I laugh as much as I cry, and I cry a lot while I am watching this. It’s a timely piece,  serving not just as a reminder that asylum seekers should be met with kindness rather than hostility, but also, actually, a call to action. If six school kids can make a difference, then why can’t we? We can all be Glasgow Girls.