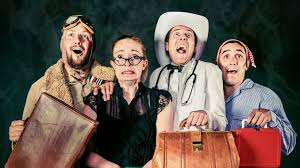 No visit to the Edinburgh Fringe is complete without at least one late-night, mad-as-a-box-of-frogs comedy event. The Lampoons: House on Haunted Hill fits the bill perfectly. Based loosely (very loosely indeed) on William Castle’s 1959 schlock horror movie of the same name, this is a production where audience members are issued with loaded water pistols and ping pong balls as they enter the venue. We are then encouraged to use said water pistols and ping pong balls at certain cue moments during the story, though – this being a late-night, alcohol-fuelled crowd – few people stick closely to the rules. (Although I’d like to point out that, as dedicated critics, we are steadfastly sober.)

Rich weirdo Frederick Loren (Vincent Price, played at one point by all four members of the cast, simultaneously) invites four guests to stay one night in a notorious haunted mansion. If they manage to survive until morning they will each receive 10,000 dollars. That’s about as much as you need to know plot-wise but, suffice to say, much fun is manufactured from running in and out of doors, the donning of fright masks, hilariously odd shadow projections, the eating of pickles (both dill and Branston), the wearing of false moustaches and, in one memorable sequence,  the full frontal ordering of pizzas. There’s more, but you probably wouldn’t believe me if I told you.

The Lampoons comprise writer/actor Oliver Malam, Josh Harvey,  Christina Baston and Adam Elliott. It’s all gloriously ramshackle and exceedingly silly and I guess that’s exactly the point. If at times there’s the suspicion that this could all be a little bit tighter, a little more controlled and that, if the cast approached their roles in absolute seriousness, this might be funnier still, such notions quickly disappear under a deluge of water and the aforementioned projectiles. The cast are clearly having a lot of fun and, happily, so are the audience.

As we join in with that well known anthem, We Are Vincent Price, it occurs to me that I probably won’t remember much about this in the morning… but I’m wrong. I remember every deranged detail. I’ve even got a false moustache as a souvenir.