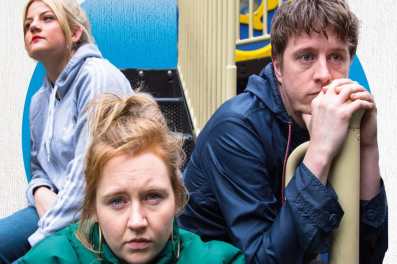 We’re big fans of Roundabout here at B & B. Paines Plough’s portable, in-the-round theatre is a wonderful space and we’ve  seen some fantastic performances here. Island Town is an especially exciting prospect for us, being a co-production between Paines Plough and Theatr Clwyd; as North Walians, we’re keen to see what this collaboration brings.

Writer Simon Longman clearly knows about small towns, about the stifling going-nowhere feelings that make people feel trapped. The location here is unspecified, ‘this town surrounded by fields’, circled by a ring road, is impossible to escape. It’s anywhere and everywhere, as symbolised by the actors’ regional accents: one Derby (I think), one Manchester and one Welsh.

This is Kate’s story, and Katherine Pearce is captivating in the role of the angry teen, full of impotent fury, raging at the injustice that sees her marooned, caring for her dying father, permanently drunk because it’s the only outlet she has. She yearns for something better, longs to head off beyond her narrow horizon, to see more of the world. But she’s tethered: too poor, too tied down, too ill-equipped to leave.

Her friends, Sam (Charlotte O’Leary) and Pete (Jack Wilkinson), are more accepting of their lot. Sam’s main concern is protecting her little sister from their violent dad, while Pete’s only ambition is to be a dad himself. Pete in particular is a tragic case: he’s a sweet character, positive and hopeful; he doesn’t ask for much. But the system seems designed to grind him down. He hasn’t any qualifications and there are no jobs locally. He can’t even get the benefits he’s entitled to, because the bus service has been cancelled so he can’t get to the job centre to sign on.

There’s no doubt about it, this is a bleak play, but there is humour too, a nicely balanced tug of war between hope and despair. And, as we draw towards the teens’ inevitable fate, we start to make sense of the strange jerking movements they’ve been making in the transitions between scenes…

Perhaps the penultimate section is a tad too long, a little too spelled-out, but all in all this is an impressive piece, a darkly accurate commentary on those society leaves behind.