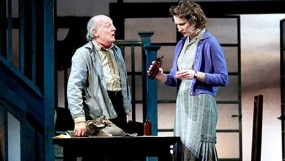 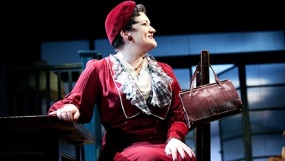 Agatha Christie is often paid a huge disservice in stage adaptations of her work. More often than not, directors decide to spoof the content, playing up the high camp aspects of her stories for laughs and, in the process, sacrificing the suspense. Luckily this production by Fiery Angel and Royal & Derngate, directed by Lucy Bailey, opts to play things reassuringly straight, transposing the original setting to the late 1950s and basing its look around Michael Powell’s infamous murder mystery film, Peeping Tom. This results in a sprightly, sure-footed version of the story that plays to Christie’s narrative strengths.

Incidentally, originally adapted by Frank Vosper in the 1930s from a Christie short story, Philomel Cottage, the play was a hit both in the UK and in New York, but had it’s own Christie-like twist, when Vosper managed to fall off a cruise ship on his way back from the states and drown. An open verdict was returned.

Cecily Harrington (Helen Bradbury) is arranging the sale of her Wimbledon flat while she awaits the arrival of nice-but-dull fiancé, Michael (Justin Avoth), from the Sudan, where he’s been working for the past few years. The general idea is for the couple to marry on his return, but a recent sizeable win on a sweepstake has kindled in her a desire for a little adventure. So when handsome American Bruce Lovell (Sam French) turns up to view the flat, she’s quickly swept off her feet by his tales of reckless adventure around the world and his alluring invitation to join her for lunch.

Almost before she knows what’s happening, she’s married Bruce and the two of them have moved to Philomel Cottage, deep in the heart of the country, where he sets about dissuading Cecily from seeing any of her friends from London. He spends a lot of his time in the cellar, which he’s converted into a dark room, in which he pursues his passion for photography. But there are mysteries that seem to lack any rational explanation. Why, for instance, does the gardener, Hodgson (Gareth Williams), keep finding empty bottles of hydrogen peroxide buried in the herbaceous border? Why does he seem to think that the asking price for the cottage was hundreds of pounds lower than the sum Cecily actually ended up paying of it? And why has Bruce torn a page from one of those true life crime magazines he’s so fond of studying?

Bradbury and French deliver convincing performances in the lead roles and the ingenious sliding set design, that puts me in mind of a set of Chinese puzzle boxes, keeps giving the audience a slightly different view of the stage, revealing areas we have previously had to imagine. If the play’s great revelation doesn’t turn out to be that much of a surprise, nevertheless, this is an assured production that holds my interest from start to finish – and its worth seeing this just for Nicola Sanderson’s priceless turn as the snobby ‘Auntie Lulu’.