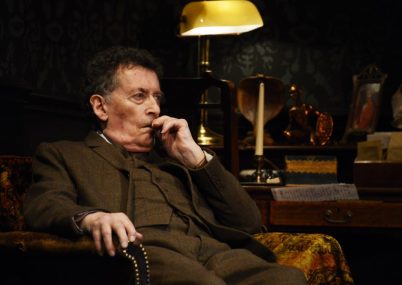 It’s November 1922 and Doctor Watson (Timothy Lightly) arrives at one of those new-fangled radio stations to talk about some of the cases he’s worked on with his old friend, Sherlock Holmes (Robert Powell). Unusually, he chooses to recount a case from the very end of their career and, via a surprisingly effective flashback device involving a slowly moving curtain, we are whisked to Devon, a few years earlier.

We find Holmes living in retirement where he is suffering from arthritis and devoting most of his spare time to two old hobbies, fly-fishing and bee-keeping. But when the dead body of a young woman is found on his private stretch of beach, Holmes simply cannot help putting in his six-penneth, even though he quickly discovers that he is already disconcertingly out of touch with the changing times. Then, he is paid an unexpected visit by Watson’s wife, Mary (Liza Goddard), who tells him that she has glimpsed the ghost of her dead son, James, back at 221B Baker Street. At first, Holmes is reluctant to return to his old haunt, but soon enough he’s there, where he learns that it’s not just the times that are changing. Watson is now dabbling in psychoanalysis and his relationship with Mary is strained to say the very least…

There’s lots to enjoy here – Powell and Goddard, seasoned stalwarts that they are, put in exemplary performances in the lead roles, the staging is rather splendidly done and it’s certainly an interesting idea to pit Holmes against unfamiliar technology, such as recording equipment, electric lighting and cinematography. If there’s a real problem, it lies with the script, which – though it does its best to incorporate classic lines from and references to the works of Conan Doyle – lacks the ingenuity and complexity of one of his labyrinthine plots. It’s dismaying, for instance, that our idle conjecture during the interval about a possible solution to the mystery turns out to be correct in every detail bar one – and that, only because the idea is so risible. It’s not that we’re great amateur sleuths, more that there simply aren’t many possibilities to choose from.

Holmes completists will certainly want to tick this one off their ‘to watch’ lists and it provides a decent evening’s entertainment – but playwrights do take on an immense weight of expectation when attempting to walk in the illustrious footsteps of Mr Conan Doyle and I’m not entirely convinced that The Final Curtain quite masters the challenge. But it’s fun watching somebody try.