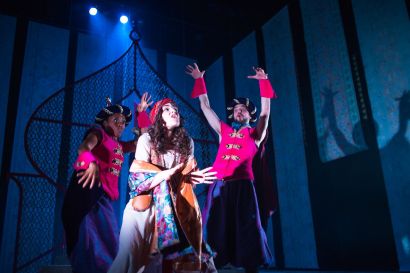 The Arabian Nights is unusual: a children’s Christmas show that never mentions Christmas. Of course it doesn’t – this is a collection of mainly Middle Eastern and Indian stories – but they’re wonderfully apt for the festive season, as marvellous and magical as can be. Suhayla El-Bushra’s script is sprightly and engaging, and nicely complemented by Joe Douglas’s lively direction. This is a delightful production.

At its centre is Scheherazade  (Rehanna MacDonald), a young girl who has fallen foul of the tyrannical Sultan (Nicholas Karimi). Desperate to stay her impending execution, she regales the taciturn leader with tales she has learned from her storyteller mother (Neshla Caplan). Despite professing to hate stories, the Sultan is beguiled, demanding more and more. And, as time goes by, the two develop an unlikely friendship.

The staging is lovely: simple but evocative, brightly coloured and celebratory. And the stories are beautifully told: there’s puppetry and music, shadow-play and song. It’s zesty and energetic, the stories tumbling across the stage as quickly and impressively as the acrobats. It could be chaotic, but it’s not, even when we are faced with a sequence of four (or is it five?) tales within tales, each left open as the next begins, a masterful piece of writing if ever there was one. The actors are fantastic too: a true ensemble, most performing many roles with humour and precision.

Accessible yet profound; moving yet funny; sophisticated yet full of fart jokes: this is perfectly pitched for a family audience.