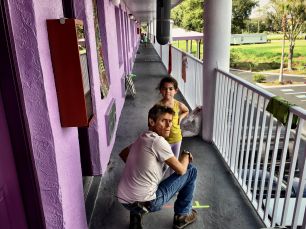 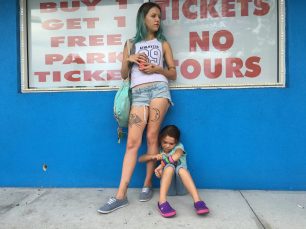 The Florida Project is my favourite film of the year so far – and there are only a few weeks left of 2017 for any new contenders to knock it off its perch. It’s a real gem: imagine Ken Loach Does Disney and you won’t be far off.

In fact, though, it’s Sean Baker exposing the tragic underbelly of the Magic Kingdom and, if this is anything to go by, the forty-six-year-old writer-director has an important career ahead of him, chronicling the travails of the American poor, living precariously in motels, lurching from one inadequate paycheck to the next.

There is real beauty in this film: Brooklynn Prince, as six-year-old Moonee, is an absolute delight, all swagger and daring, as cheeky and charming as it’s possible to be. She feels real, a happy, confident kid, who knows she’s loved and cared for, and doesn’t worry about much. Because her mom, Halley (Bria Vinaite), might be living on the edge – struggling to find work, doing whatever she has to in order to pay the rent – but she never once lets Moonee down. She’s there for her, always, ensuring Moonee is fed and bathed, enjoying life. She’s a textbook problem parent – jobless, feckless, dabbling in drugs and prostitution – but this film shows us how wrong the textbook is.

It’s heartbreaking though; no one should have to live as uncertainly as this, especially not in the world’s richest country. Disney World’s looming presence, just out of reach, serves as a not-so-subtle metaphor: we see the glitz and glamour of the phony castle, while the squalid truth lurks just beneath. At least Halley’s found them a decent motel, with a caring manager called Bobby (Willem Dafoe), who keeps the place clean and tidy, and respects the residents. But they’re still living in one room, forced to participate in the farce of ‘moving out’ once a month so that they don’t accrue any rights as residents. They’re still eating food delivered by a charity, all cheap sugary carbs, presumably stale and out of date.

The cinematography is striking: the overwhelming impression is of cheeriness and colour. This is Moonee’s world and, free for the summer from the confines of school, she owns it, roaming freely and playing host to new motel guest, Jancy (Valeria Cotto), who’s staying with her grandmother (Josie Olivo), while her own mom ‘sorts herself out.’ Jancy’s grandma provides an oasis of calm: she has things very much sorted out; she might be poor and living in a motel, but she cooks proper food and is hot on discipline. Almost everyone here is decent, really, looking out for each other, doing their best. It’s a warm-hearted and affectionate depiction of those who are often disparaged. It’s also a searing damnation of a system that lets its people down, and its shattering conclusion is utterly devastating. Baker is clearly a film-maker with a lot to say – and he says it very well.