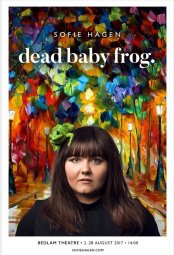 I’m looking forward to this. I first encountered Sofie Hagen via Richard Herring’s podcast, RHLSTP (RHLSTP!), and then through The Guilty Feminist. We saw Shimmer Shatter at the Liquid Rooms last year, and really enjoyed it. So I’m keen to see what she’s offering this time.

Dead Baby Frog is about (trigger warning) emotional abuse. Specifically, it’s about Sofie’s step-grandfather, with whom she lived as a child, and his cruel, controlling ways. He sounds awful – a narcissistic, bullying man, with a fragile ego and a short fuse – and his behaviour has clearly had a huge impact on Hagen’s life.

It’s horribly fascinating, and yet somehow Dead Baby Frog feels like something of a missed opportunity: there’s definitely a good show in there, but it’s not yet fully realised. It’s not bad exactly – this is Sofie Hagen, after all, and there’s no denying she’s a funny woman who knows how to get a crowd onside – but it never really grows beyond its anecdotal origins. She says, “It’s not about me; it’s about people like me,” but doesn’t extrapolate anything from her own story. Nor does she really mine the situation for maximum comedy (which, admittedly, would be hard to do); it’s as though she needs to dig a little deeper to make this into a finished show.

She’s at her most confident and amusing when she’s on familiar ground: the Westlife bit is easily the most engaging. And there are moments when she hints at the profundity that might be there to be unearthed: the crossed fingers, the baby frogs, the art.

I’d be interested to see where this show ends up, assuming she tours it. And I’ll still be watching to see what she does next.