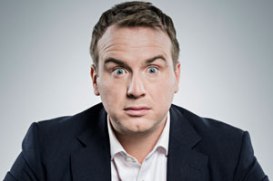 My, but this is a boozy crowd! No judgement intended (I can be a bit of a boozer myself) but it’s noticeable: almost everyone entering the room is holding on to at least one pint; many punters are gamely carrying two. Well, it wouldn’t do to run out, would it? I’ve never been so aware of the drinking at a festival gig. And there are a fair number of actual drunks here too: people who, though friendly and good-humoured, have clearly already reached the stage where they might just derail a show. I’ve also never seen Matt Forde before. I wonder if his audience tells me something about him.

Not really, it turns out. Maybe it’s just coincidence. There’s a kind of blokey jocularity to Forde’s delivery which complements the room’s beeriness, and there are indeed interruptions from a group of older men (one wants to go to the toilet; a second worries that the first’s been gone too long; a third just wants to have a chat) but Forde handles it well: he’s friendly and polite, but doesn’t let things stray too far.

Because he has a lot he wants to say – and we all want to hear it. His schtick is political impressions interspersed with commentary, and it’s really very good indeed. The impersonations are witty and well-judged, and the observations show he’s knowledgeable: interested and interesting, letting no one off the hook. Okay, so the Nicola Sturgeon section falls a bit flat (I don’t think there are actually many Scottish people in tonight, so there maybe isn’t enough shared understanding for this to really fly), but most of what he says hits the mark successfully. It’s not massively challenging, but it is thought-provoking: it’s Rory Bremner territory. His Donald Trump is a definite stand-out: as sharp and satirical and funny as can be.

A fascinating show, this one – quite different from most of what’s on offer at the Fringe. It’s well worth an hour of anybody’s time.