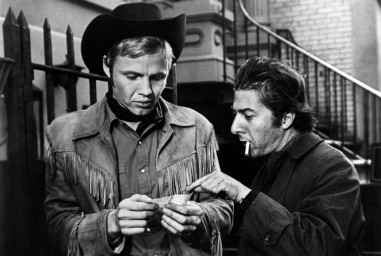 Following hard on the heels of The Graduate, comes this beauty, shown as part of the Cameo Cinema’s Dustin Hoffman season. Released in the UK the year after Mike Nichols’s Oscar winner, this searing evocation of the grimy underbelly of life on the streets of New York was another of the late 60s film that fuelled my early interest in cinema. I first saw it forty-eight years ago and over the intervening period, it has lost none of its considerable powers.

Joe Buck (Jon Voight, eerily displaying the distinctive facial characteristics that his daughter, Angelina Jolie would make famous years later) is a troubled young dishwasher from the ass-end of Texas, who decides to reinvent himself as a cowboy-styled stud and travels to New York city with the intention of earning a living by seducing rich young women for money. Of course, the reality of the situation is quite different from his expectations. After what looks like an initial success, Joe ends up paying the first woman he ‘seduces;’ and things don’t improve when he meets ‘Ratso’ Rizzo (Dustin Hoffman), an impoverished huckster who volunteers his services as Joe’s ‘manager.’ Ratso cons money out of Joe on their first meeting, but when they meet up again, the two men move into a filthy derelict building where an uneasy alliance begins to develop.

As with The Graduate, what strikes me here is how edgy and uncompromising this film is and yet it was a huge mainstream hit, back in the day, winning three Oscars and receiving countless nominations for the performances of Voight and Hoffman. It steps fearlessly into territory that hadn’t really been seen in the cinema before, so much so that Nichols famously advised Hoffman not to take the role of Ratso, believing that it would kill his career. The evocations of Poverty Row New York are brilliantly rendered and there’s also an extended sequence set in an Andy Warhol free party that vividly depicts the burgeoning anti-establishment movement of the period. Filmed with an impartial eye by English director John Schlesinger, it expertly nails the shallow, consumer-obsessed tawdriness of America in ways that few native-born directors could hope to achieve.

Fears that the film would be exploitative are largely unfounded. The dominant theme here is the deepening relationship between the two male protagonists and how in the midst of grinding poverty, both of them are fuelled by impossible dreams. This is a triumphant film, from its hard-hitting opening to its poignant conclusion. If you get the chance to see this on the big screen, don’t let it pass you by.