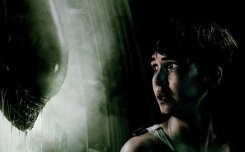 Prometheus was one of the biggest cinematic disappointments of recent years. After several underwhelming Alien sequels, fans of the series were eagerly anticipating Ridley Scott’s return to the world that he originated in 1979, but what we actually got was some distance away from that premise – perhaps a few steps too far. So Covenant is very much Scott’s attempts to make amends for that misstep and to some degree, he’s been successful in his ambitions – even if too much of the film riffs on earlier ideas. Oddly, this one feels closer to James Cameron’s brilliant second instalment, Aliens – which Scott still feels was arranged ‘behind his back.’

This film is set ten years after Prometheus and the colony ship Covenant is making its way towards a new planet where the passengers hope to start a whole new world. While the crew are deep in hyper sleep, the day-to-day running of the ship is left to ‘synthetic’ Walter (Michael Fassbender). But an unexpected incident means that the crew are woken seven years too early and, even worse there are a couple of fatalities – including the Captain, the husband of Daniels (Katherine Waterston). The new captain, Oram (Billy Crudup) isn’t exactly relishing the idea of getting back into those unreliable pods, so when the crew happen upon an inexplicable signal issuing from what appears to be a nearby habitable planet, he feels it’s worth going in to investigate…

Sound familiar? Well, yes, very. Pretty soon an advance party are making a landing on the planet and realising that it really isn’t a safe place to try and make a new home – and Walter meets an earlier model of himself, David, who has been surviving alone on the planet since the events of Prometheus. But can the advance party make it back to their spaceship alive?

Ridley Scott’s films are nearly always good to look at and he manages to crank up enough tension to keep you on the edge of your seat through much of this. The planet locations are beautifully set up, Waterstone steps gamely into Ellen Ripley’s boots and there are enough chest-bursters, face-huggers and Xenomorphs to keep the fans happy. There’s also an interesting trope set up between caring, artful David and his cooler, less compassionate successor, Walter. I’m delighted to see that the project has finally gone back to the designs of creature-creator H.R. Giger for its look. But there remains the conviction that we’re simply revisiting territory that has already been well and truly trodden flat. The news that Scott is planning to expand the Alien universe with another three films does not exactly fill me with excitement. He’s done what he should have done last time out. Surely now, he should let this idea rest and move on with his many other projects. After all, at 79, who knows how many more he will achieve?

For my money, Alien: Covenant would make a decent swan song for the franchise. Leave it, Ridley. Step away from the franchise. There’s nothing new to see here.