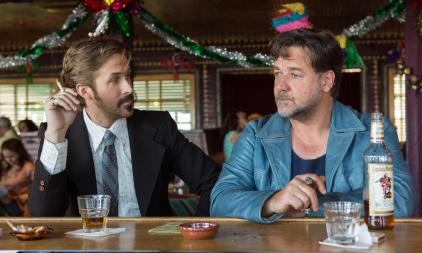 Shane Black is an interesting fellow. A former screenwriter who’s status went meteoric after the runaway success of the Lethal Weapon franchise, his career went into the doldrums after later multi-million dollar scripts failed to put bums on seats in enough numbers to earn back the huge advances. But in 2005, his first film as  director, Kiss Kiss Bang Bang earned his some much-needed brownie points (at least from the critics, even if it didn’t pull in huge crowds)  and his subsequent helming of Iron Man 3 made him, once again, a bankable name, a big hitter.

So, he has the chance to start over and here’s The Nice Guys, which has all the classic Shane Black tropes: essentially a buddie movie, it features two mismatched characters bumbling their way through a complicated plot, milking some genuine big laughs along the way and pausing every so often for a insanely high-powered, ultra violent action sequence. Throw in the evocative 70s setting and this is everything that Inherent Vice could have been if it had bothered to incorporate a decent plot.

Jackson Healy (Russell Crowe) is a former cop, now fallen on hard times and reduced to beating up people for a living, something he does to the very best of his ability. One such person is Holland Marsh (Ryan Gosling) possibly the world’s most inept Private Detective, but when it transpires that both men are involved in looking for the same missing person, a young runaway who has recently been linked to the tragic death of infamous porn star, Misty Mountains, it seems expedient to join forces and pool their ‘expertise.’ Sadly, this is something that’s in rather short supply, but luckily Marsh’s precocious teenage daughter Holly (an appealing performance by Angourie Rice) has enough chutzpah to help them through. As the plot unfolds it transpires that there’s a conspiracy at the heart of the story that goes all the way to the top of the slippery pole.

Crowe and Gosling make an appealing double act. Gosling is particularly good, wringing every last drop out of his assured comic performance, (this is a man who can’t break a window without severing a major vein) while Crowe is, for once, actually rather likeable as a bluff, hard-hitting guy with anger management issues. While you could argue that the film is essentially a big piece of fluff, what fabulously accomplished fluff it is! It breezes effortlessly through its 116 minutes running time and actually leaves you wanting more. A coda suggests that there could be a second adventure for these two and on the form of this one, I’d say that’s a decent suggestion.

You’ll come out relishing some of Marsh’s more idiotic lines. A particular favourite? ‘Yeah, well you know who else was ‘just following orders?’ Hitler!’