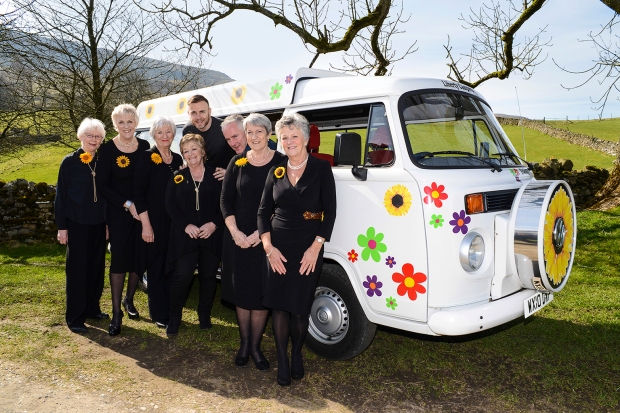 I’ll be honest. I didn’t have high expectations for this. After all, I thought, Calendar Girls had already been a hit film and a successful stage play. The news that author Tim Firth had spent the last couple of years turning it into a musical with his friend, Gary Barlow, suggested that this particular idea had been taken just about as far as it could possibly go. So I’m surprised and delighted to say that The Girls, from its jaunty opening chords onwards, is an unqualified delight, a production that has the word ‘hit’ written all over it. Nor is it the kind of cheesy nonsense that often qualifies a show for such a description.

It’s a  very familiar true life story – how a group of Women’s Institute members in an obscure Yorkshire town, decided to raise money for a local cancer hospital by appearing in a nude calendar. But Firth has opened up the story to give it a wider scope and the wry, witty lyrics seem to have so much to say about the everyday life of ordinary people that you can’t help admiring them. This show surprised me. I hadn’t expected to laugh as hard as I did, nor had I expected to cry quite so much – there are moments here that will wring tears from the coolest people in the audience.

It’s an ensemble piece with an eighteen strong cast, all of whom deliver faultless performances. The main story focuses on the friendship between Annie (Joanna Riding) and Chris (Claire Moore), but every character has a story arc and each one is fully explored. If I have an issue, it’s with the title – the six lead protagonists aren’t ‘girls’ at all but mature women; and when was the last time you saw a musical that offered major roles to so many of them? Roles, more importantly, that treat their subjects with respect even when the women are stripping off for charity. The nudity, by the way, is handled with consummate skill, so it never feels exploitive – you are laughing with the women, not at them and that’s an important distinction.

A word too about Robert Jones’s ingenious set design. What appears at first to be haphazard heaps of painted cupboards and lockers becomes a whole variety of locations, including the hill that overlooks the village of Cracoe where the story is set and, in one memorable driving sequence, the outline of a city at night.

Gary Barlow knows a thing or two about writing a decent pop tune and here’s the proof that he can write show tunes too – you’ll most likely come out of the Lowry humming, whistling or singing one of them. The real life ‘Calendar Girls’ were in the audience for tonight’s performance and I’d say they must have been delighted with the latest incarnation of their remarkable story. Indeed, if this show doesn’t get a West End transfer soon, then I’ll be very surprised. For once, an enthusiastic standing ovation was thoroughly deserved.

Who saw that coming?