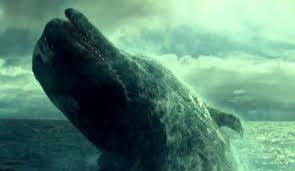 Around a year ago, searching for a new story to write, I pitched an idea to my editor. Why not, I suggested, rewrite Moby Dick – or rather, base it around the true story of The Essex, the ship that inspired Herman Melville’s classic tale? And just to make it more relevant to younger readers, why not present it from the POV of the cabin boy?

For a variety of reasons, my editor said no and it  would now seem fortunate that she did, because this is exactly what In the Heart of the Sea is and I’d probably have found myself the author of an unreleasable book (or at the very least open to accusations of plagiarism). Ron Howard’s take on the story is a big, sprawling epic of a film, a gorgeous evocation of a lost era and I loved every minute of it.

The story starts some fifty years after the main event, when Melville (Ben Whishaw) visits the grown-up Tom Nickerson (Brendan Gleeson) in Nantucket to research the true story of the Essex. Nickerson grudgingly obliges and we flash back in time to meet Owen Chase (Chris Hemsworth) who despite being promised a captaincy for his next voyage is appointed first mate to the rather better connected George Pollard (Benjamin Walker). The Essex sets sail in search of sperm whale and the crew experience a series of disasters that would try the patience of Job, not least the malevolent intentions of a giant white whale, who seems intent on exacting a terrible revenge on the men who have dared to take him on. The whale itself is an incredibly convincing CGI creation and while the killing of such creatures will not sit easily with contemporary audiences, this is an issue that is addressed (albeit obliquely) in the film – and the truth is that men really did go after these marine giants in tiny rowing boats in search of the precious oil to light their lamps and you have to marvel at their courage and endurance in the face of such danger.

This is ultimately a story of survival against incredible odds and one, moreover that is based on real events. The word is that Howard’s film has failed at the box office and it’s certainly not for everyone, but I thought it a remarkable achievement that kept me enthralled from start to finish – a perfect choice for my birthday.