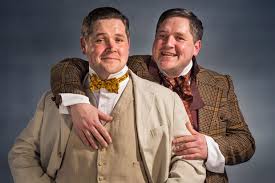 Carlo Goldoni is, of course, the playwright whose earlier work, A Servant of Two Masters was so fruitfully adapted by the National Theatre to create One Man, Two Guvnors. The Venetian Twins is cut from the same bolt of gaudy cloth (indeed, can it really be a coincidence that lead actor Grant O Rourke is a dead ringer for James Corden?) At any rate, it matters not. This is a farce majeure, beautifully played, timed to precision and rib ticklingly funny from start to finish.

The action takes place in Verona. Rich and somewhat dim country boy, Zanetto (O Rourke) comes in search of a bride, specifically the nice but equally dim Columbina (Angela Darcy) whose gold-digging father, The Provost senses an opportunity to refill the family’s depleted coffers. But Zanetto has an identical twin brother, Tonino (also played by O Rourke) from whom he was separated as a child. When Tonino flees his native Venice for Verona along with his sweetheart, prototype feminist Beatrice (Jessica Hardwick), the scene is set for a bewildering series of ‘mistaken identity’ disasters. It’s a cliche to say that much hilarity ensues but in this case, that’s exactly right.

In the wrong hands, farce can be toe-curling, but there’s not a foot put wrong here (unless you count the hilariously drunken old landlady who falls repeatedly through an open trapdoor.) This owes much to Commedia Dell Arte, but this is no ‘off-the-peg plot. Much of the wittily updated script by Tony Cownie is delivered in broad Scots accents, which work brilliantly, and there’s a wonderfully foppish performance by John Kielty as the effete (and inevitably English-accented) Florindo. There’s some wonderfully fruity innuendo, a fistful of malapropisms from Columbina and a stomach-churning scene involving a blocked toilet that modesty forbids me to describe in detail. Meanwhile, O Rourke slips effortlessly between the two roles simply by doing up the top button on his jacket and adopting a different expression. The two acts galloped by while the audience, myself included, were convulsed with laughter from start to finish. If laughter is something you relish, then you really should see this before it moves on. It’s a Venetian blinder.