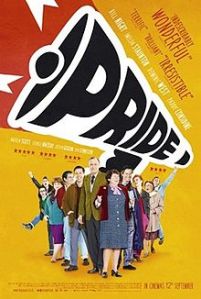 Set in 1984, at the height of the miner’s strike, Pride tells the true-life story of Mark Ashton (Ben Schnetzer) a young gay activist who manages to persuade a group of like minded-friends to form LGSM (Lesbian and Gays Support the Miners). They start to collect money on behalf of one particular group of strikers, in South Wales and are so successful, It’s not long before the group meets up with likeable Union man, Dai (Paddy Considine). He invites them to the sleepy village of Onllwyn, to meet the miners in person – where inevitably, they encounter resistance from some of the more reactionary inhabitants – but after an initial frosty reception, they start to find allies in some rather unlikely places…

Pride is simply irresistible. Cut from the same cloth as films like The Full Monty and Brassed Off, it features a terrific ensemble cast – Bill Nighy, Imelda Staunton and Dominic West are undoubted highlights, but the overall casting is note-perfect. While it occasionally plays for easy laughs, (‘Dai, your gays have arrived!’) it’s never less than entertaining stuff and also takes the opportunity to slip in some genuinely throught-provoking moments.

It would be a cold heart indeed that doesn’t shed tears at the film’s emotional conclusion. Like most ‘true-life’ stories, there remains the conviction that dramatic licence must have been exercised on some of the actual events, but nevertheless, this is a successful slice of drama, snappily directed by Matthew Warchus, wittily scripted by Stephen Beresford and one that manages to keep itself just the right side of sentimentality.