Mediocre White Male is a cunningly structured monologue, which starts with the protagonist (played by Will Close) performing a few lines in character as the resident ‘ghost’ in a stately home somewhere in Winchester. But it isn’t long before those melodramatic proclamations are abandoned and he’s climbed down off his plinth to chat informally with the audience. He confesses himself bewildered by the complexities of modern life, and by sexual politics in particular.

Why can’t he refer to his young female colleagues as ‘girls,’ he wonders? Why must be endure workshops on the subject of gender equality? He’s thirty years old, for goodness sake! Surely his experience must stand for something?

The nuanced script by Close and his co-writer, Joe von Malachowski, might have been better suited to a more intimate venue. In the lofty surroundings of the Assembly Roxy, the opening sections of this feel distanced, rather than just socially distanced – and it takes a while before the narrative really begins to hook me in. But hook me it eventually does, at first making me feel sorry for this much put-upon character, who seems horribly misunderstood by everyone who knows him. Sidelined by his friends, shunned by his colleagues, he nurtures a deep sense of regret for a relationship that went badly wrong, back in his youth. What happened ten years ago has changed his life. He’s now a loner, still working in the uninspiring job that was only meant to be a temporary position.

It’s only as his tale enters its later stretches that I begin to fully appreciate what this story is really about- that what’s actually being related here is a tale of toxic masculinity, one that deftly demonstrates how white male privilege can assert such a powerful grip. The full impact of the deception is cleverly held back until the final line of dialogue.

Okay, if I’m honest, I feel this would work better if the character were older – some of the ‘bewildering’ things our protagonist mentions ought to fit easily enough into the wheelhouse of your average thirty year old – and those early sections would benefit from a more humorous approach. If the audience began by laughing out loud, rather than just chuckling, the monologue’s latter stages would be all the more affecting.

But Close is nonetheless a compelling narrator and it’s an interesting – and thought-provoking – piece of theatre.

Great British Mysteries: 1599? is one of those shows that seems tailor-made for the Edinburgh Fringe. It’s deceptively simple but highly effective. Two actors in slightly dodgy Tudor costumes? Check! An absurdly convoluted story about a search for a mysterious witch? Check! And a collection of truly terrible jokes delivered with such verve and aplomb that they somehow transcend their humble origins to become laugh-out-loud funny? Double check! Thanks to the talents of Will Close and Rose Robinson, who (don’t take this the wrong way, you two) have expressive faces that were just made for comedy, this is probably one of the most enjoyable hours you’ll spend on this year’s Fringe.

Thomas Tyrell and Olive Bacon encounter each other on the streets of London in er… well, 1599 (obviously) and, recognising that they have many things in common, decide to embark upon careers as detectives. Thomas is extremely fond of recounting his years as a sailor alongside Sir Walter Raleigh, while Olive is a mistress of disguise, who spends much of her time trying to teach the (decidedly thick) Thomas how to deliver a punchline. There are artfully placed running gags about bear baiting and the six wives of Henry the Eighth, while a large screen behind the duo offers us a succession of amusing images to help propel the story along. Oh yes, there’s also a mysterious priest who delivers his sermons in the form of contemporary song lyrics, a pig who seems to be  permanently fertile, and the added delight of watching Thomas and Olive dance the occasional fleet-footed gavotte. What’s not to like?

Students of history will learn precisely nothing from this production, but those who like to chortle, snigger and even let out the occasional hoot of hilarity will certainly enjoy their visit to the year 1599. 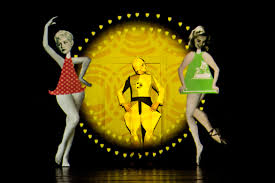 It’s not often that you sit down in the theatre with no real expectations and witness something so unique, so unexpected, that you leave with your mind well and truly blown; but that’s exactly how I felt after watching Golem by the experimental theatre company 1927. This eye popping amalgam of live action, music and (occasionally jaw dropping) animation is the most innovative and exciting spectacle I’ve seen in years.

The myth of the Golem, is of course, one of the oldest tales in existence. A creature created out of clay to do mankind’s bidding, its most famous manifestation was in Paul Wegener’s silent movie of 1915, the imagery of which is sometimes evoked here. In this version of the story, Robert (Shamira Turner) leads a life of unremitting tedium, enacting the same sequence of events every day, working in a ‘binary backup centre’ to earn his wages and too shy to approach new employee, Joy (Rose Robinson, brilliantly conveying the antithesis of what that name suggests). But when a friend, Phil Sylocate (Will Close) launches his new business, offering Golems that will carry out the owners every whim, Robert is an eager customer. At first all goes well, but as time passes, the Golem becomes ever more assertive, until inevitably the question arises; just who is in charge here? And what happens when the original Golem is updated to the new, faster, smarter Go 2?

If the story seems familiar, it should be borne in mind that the execution is key here – the perfect meld of acting, animation and music create a surreal, dreamlike world and one can only marvel at the degree of precision that must have been required to bring this extraordinary production together. Lest you be worried that it all sounds a bit dour, don’t be fooled – there’s plenty of comedy skilfully woven into writer/director Suzanne Andrade’s witty script. Ultimately, the word that best describes Golem is ‘magical’. Though on reflection, ‘unmissable’ will do just as well.

The production is at Home, Manchester until the 17th of October.