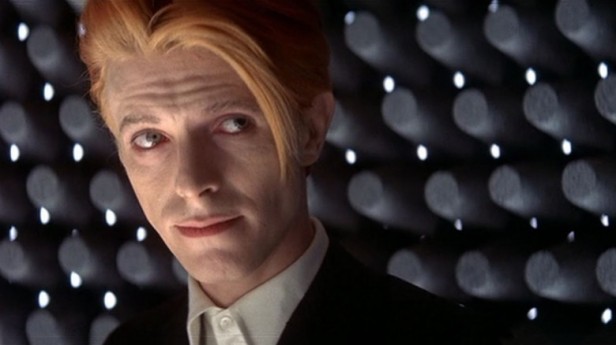 Nicolas Roeg’s challenging – and in many ways groundbreaking – feature first hit cinema screens in 1976, the year before Star Wars came along and changed the intergalactic movie game forever. The Man Who Fell to Earth came hard on the heels of three other Roeg successes: Performance, Walkabout and (best of all) Don’t Look Now, all of which demonstrated the director’s idiosyncratic approach to filmmaking and his absolute refusal to tell any story in a straightforward manner. Now back on limited release, it’s interesting to reasess TMWFTE on the big screen. I saw it in 1976 and haven’t watched it since. I remember being blown away by it at the time.

David Bowie plays space traveller Thomas Jerome Newton, who plummets down into the wilds of New Mexico, with a bunch of gold rings to pawn for ready money and with a bundle of  gamechanging patents in his back pocket. (Disposable cameras anyone? Tiny stero sytems? Nah, that’ll never take off.) Pretty soon, he’s a reclusive Howard Hughes type, living in New York, and using lawyer Oliver Farnsworth (Buck Henry) as the frontman for his various multi-million dollar business enterprises. Philandering university lecturer Nathan Bryce (the recently departed Rip Torn) notices the ripples that Thomas is making and soon ends up as an employee of the company.

On a trip back to New Mexico, however, Thomas falls in with ditsy chambermaid, Mary-Lou (Candy Clark), and the two of them quickly become an item. She introduces Thomas to the dubious joys of alcohol and, from there, he begins to take on the various shortcomings that humanity has to offer. As the film progresses, they exert an increasingly powerful hold on him, until he is finally subsumed by them.

It’s a dazzling trip, though some of the elements – viewed through a contemporary lens – have not aged particularly well. There’s an over-preponderance of long (and extremely graphic) sex scenes, some of which feel decidedly prurient – and the state-of-the-art makeup effects now – inevitably – look somewhat shonky. (The conceit here is that Bowie’s character stays the same age, while the human protagonists around him age dramatically.) But there’s little doubt about the power and grace of Bowie’s performance, even if it has to be said that he’s clearly portraying a character who is only one step removed from his own persona at the time.

Bowie would never again find a film role that fit him as perfectly as this one and Roeg too was about to see his fortunes decline with the failure of his next feature, Bad Timing, and the films that came after it. But TMWFTE stands as a testimony to an auteur at the height of his powers, a long, twisting kaleidoscope of a film, full of eyepopping images and wry observations on the depravity of mankind.

It’s not what you’d call perfect, but it’s well worth a look.