The NT Live broadcasts are a wonderful innovation, an opportunity for viewers across the country to watch live performances beamed direct from the stages of London. We’ve seen some excellent productions in this way and, on paper, Straight Line Crazy sounds really promising. A new offering direct from the Bridge Theatre, written by David Hare, directed by Nicholas Hytner and starring Ralph Fiennes. What can go wrong?

Well, plenty, as it happens. ‘Show, don’t tell’ may be something of a cliché, but these are the three words that are repeatedly drummed into every writer of fiction from the word go. So how has somebody as seasoned as Hare managed to create a play that tells us next to nothing but shows us even less?

The play’s first act is set in 1926, and influential urban planner, Robert Moses (Fines) is working to push through his plans for Long Island, where the various roads and bridges he envisions will allow the masses to travel to what have previously been exclusive beaches. To this end, he has enlisted the likeable Governer Al Smith (Danny Webb), and their resulting banter is overseen by Moses’ employees, Finnuala Connell (Siobhán Cullen) and Ariel Porter (Samuel Barnett). The two men bluster amiably over glasses of bootleg whisky but we learn precious little about them, other than the fact that Moses is prepared to bend the rules in order to see his concept through.

The second act is set thirty years later, when the tide of popular opinion is beginning to turn against Moses. Here at least, the action is opened up beyond Moses’ headquarters, to a public meeting where people have the opportunity to speak out against his single-minded obsession with offering Manhattan up to the dominance of the motor car – but once again we learn very little and, all too soon, we’re back to Moses’ office for more bluster.

And that’s pretty much what you get. Fiennes, to his credit, is a terrific actor, and of course he does his best to imbue Moses with some depth, but we’re reliant on Connell’s character to occasionally step in and tell us key facts about the man – in some cases to actually remind him about things he must already know. It’s all curiously inert and unengaging and, by the play’s conclusion, which points out that Moses is still set in his ways and not about to change anytime soon, I’m left with the conviction that there must be a better story in there somewhere.

Straight Line Crazy might just as well be a radio play – and it doesn’t help that I’m fresh from seeing Wise Children’s Wuthering Heights, an endlessly inventive adaptation that seems to rejoice in finding fresh ways to show an over-familiar narrative. This seems to be its polar opposite, masking rather than illuminating a potentially interesting character.

File this one under D for ‘disappointing.’ 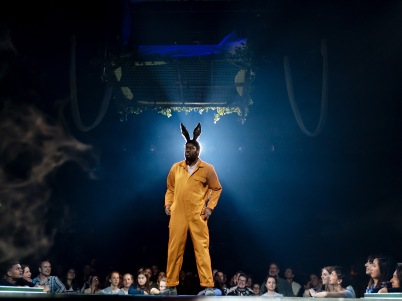 Watching immersive theatre via a screen, especially a small screen, is always going to be oxymoronic. My first thought, as Egeus (Kevin McMonagle) drags his errant daughter, Hermia (Isis Hainsworth), through the Bridge Theatre’s standing audience to face the judgement of Theseus (Oliver Chris) is, ‘Oh, this isn’t going to work…’ By which I mean, this isn’t going to work for me. Because sometimes you really do have to be there.

This production, directed by Nicholas Hytner and Ross MacGibbon, is all about the live experience. I can only imagine how exhilarating it must have been in that auditorium, at once spectator and spectacle. Instead I’m at home (for the millionth night running), sitting on my sofa, watching via a computer.

It’s still very good, and I soon get over feeling distanced. I suppose we’ve all had to get over a lot stranger things in recent times. The chilling opening scene – where father-of-the-year Egeus seeks permission to put his daughter to death if she refuses to marry a man she doesn’t love – highlights the importance of the midsummer madness in the woods. Away from the strict patriarchal rule of Athens, the characters are free to explore their deepest desires, able to give rein to their true selves.

The story – for those who need reminding – is of four young lovers who run away into the forest. Also present is a group of amateur actors, seeking a quiet place to rehearse their latest play, and – of course – the resident fairies, who view these human interlopers as playthings, to be teased and manipulated just for fun. In this version, Oberon (Chris) and Titania (Gwendoline Christie)’s roles are switched, with Titania orchestrating the action.

Bunny Christie’s design is bold and daring, all flying beds and shifting green floors. The audience is called upon to move with the action, to pass a parachute above their heads, to dance; they become the forest’s shadows, the Athenian court. I’ve seen a lot of immersive theatre, but rarely anything as well-integrated as this, where the audience action feels purposeful and not just grafted on. The beds are especially clever, highlighting the dual themes of sex and dreaming; it’s not subtle, but why should it be? This is not a subtle play.

There’s not a bum note here, but there are some standout performances, not least from Hammed Animashaun, who plays Bottom as a wide-eyed enthusiast rather than a bumptious fool. He’s utterly endearing, so I’m delighted with Hytner’s decision to make his drug-fuelled tryst with Oberon a tender one, ill-advised but not risible. David Moorst’s Puck is also a delight, all twisty movements and Mancunian patter.

In short, I wish I’d been there; a show like this reminds me exactly why I love live theatre. But seeing it like this is much, much better than not seeing it at all. 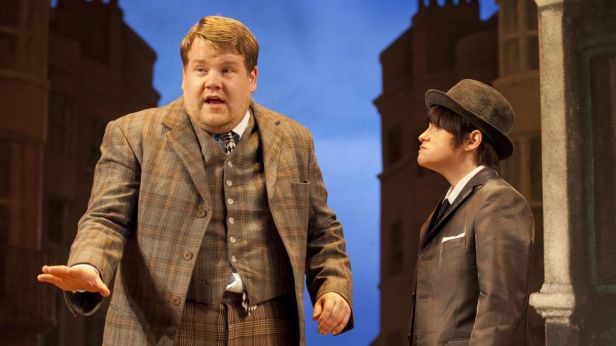 Recordings of live theatre are the closest we can get to the real thing right now. It’s not the same, of course, especially not as an iMac is the largest screen we have. But it’s a whole lot better than nothing and, like thousands of others, we’re sitting on our sofa at 7pm tonight, ready to take advantage of the first of the National Theatre’s free YouTube screenings, a welcome Corona-distraction if ever there was one.

It’s One Man, Two Guvnors this evening, which we saw at The Lowry back in 2011 and thoroughly enjoyed. And it’s long enough ago for us to relish the chance to see it again, to retain an element of surprise at the humour, to have forgotten the punchlines to the jokes.

James Corden is magnificent in the lead role (the ‘one man’ of the title, Francis Henshall); it’s easy to see why his performance was so lauded, earning him a coveted Tony award. He’s brimming with talent, and I’ll never understand why he’s anathema to so many people. I defy them to watch this and remain unimpressed.

Based on Goldoni’s eighteenth century play, The Servant of Two Masters, Richard Bean’s farcical script transposes the action to 1960s Brighton, where Henshall finds himself doubly employed, acting as ‘minder’ not only to Stanley Stubbers (Oliver Chris), but also to Roscoe Crabbe (Jemima Rooper) – a situation made more complex by the fact that Stubbers is in hiding after murdering one… ahem… Roscoe Crabbe. Hapless Henshall tries to juggle the two jobs and fails at every turn. It’s ridiculous, nonsensical stuff – and I love every minute.

Nicholas Hytner’s direction is spot on, and the skiffle band covering the scene transitions is a lovely idea that pays real dividends. But it’s Cal McCrystal’s choreography of the physical comedy that really stands out, a dynamic blend of clowning and drama that ensures there’s never a dull moment. The storyline is pretty slight, but holds up for three hours because of the vitality of the performances.

One Man, Two Guvnors is available on the National Theatre’s YouTube channel until next Thursday, the 9th April, when Jane Eyre will take its place.

Don’t miss the chance to see it. After all, what else have you got to do?