Some people bemoan their prevalence, but I don’t object to remakes of classics, so long as they’re done well. Little Women was one of my favourite films of 2019, with Greta Gerwig demonstrating exactly how worthwhile such revisitings can be. I like the vim and vigour that seems to be on-trend, the opening up of old favourites to a brand new audience.

Admittedly, I’m puzzled – and a little irked – by the addition of a full stop to Emma.. It seems affected, a bit try-hard. I’m hardly mollified by the explanations I find on-line either: there’s a ‘period’ because it’s a period drama (doh!) or – worse – this is the final, definitive version of the tale. (No, that would be the book.)

Still, I’m keen to see Emma., particularly as the poster, trailer and cast list hint at something sprightly and fun. I love Jane Austen’s novel, and have enjoyed a range of adaptations (Clueless, obviously, is the best). Eleanor Catton is also a writer I admire. But, sadly, neither her script nor Autumn de Wilde’s direction offer us anything more than a pretty confection.

Speaking of which, there is a lot of pretty confectionary in this film, with towering four or five-layer cakes present on almost every table (disappointingly, we never see them cut; I’d like to know what they look like inside). The dresses are gorgeous too, and the furnishings. In fact, it’s all rather ravishing, but there’s almost no substance – an empty edifice, just like the cakes.

It never feels real. Every emotion seems transient, every slight soon forgotten. Emma (Anya Taylor-Joy) is, as we know, handsome, clever and rich. She’s unbound by the need to marry, as she is financially secure, and anyway, her father (Bill Nighy) needs her at home. To stave off the boredom of wandering around a big posh house and wearing nice frocks, she decides to indulge in a spot of match-making. But it takes Emma some time to realise that other people aren’t as privileged as her, and that her meddling can cause them actual hardship. For a modern audience, this is a problematic narrative, with its underlying assertion that we should all know our place. But this is never addressed, not even obliquely; in fact, if I didn’t know the source material, I don’t think I’d be able to ascertain the social hierarchy at all. The costumes don’t make it clear, nor do the characters’ interactions. Just sometimes we are told that a character is poor, or that their prospects aren’t too good.

The characters aren’t defined enough, either, especially the men. The differences between Mr Knightley (Johnny Flynn), Mr Elton (Josh O’Connor) and Frank Churchill (Callum Turner) are barely perceptible; in the novel, the three are worlds apart. In fact, although Flynn performs well in the role, I don’t think the script even makes clear who Knightley is; I’ll wager many a newcomer to the story assumes he’s Emma’s brother at first.

Mia Goth is the standout, imbuing the unfortunate Harriet Smith with real charm and naïvety. Her nervous reverence for Emma is perfectly drawn. Miranda Hart also puts in a decent turn as Miss Bates, offering us the film’s only real moment of authentic emotion and poignancy.

All in all, this feels like an opportunity missed, a waste of talent and potential. 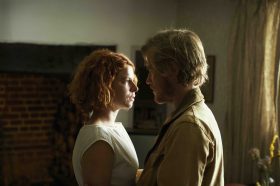 Beast is a well-crafted psychological thriller with a twisty-turny storyline that keeps you gripped and guessing right up to the very last frame. The first full-length feature from writer/director Michael Pearce, it’s set on Jersey and exploits the island’s unique atmosphere to great effect. Make no mistake, this is an assured debut from a talented young film maker.

Moll (Jessie Buckley) is a troubled young woman haunted by a violent incident in her childhood. Years later, she’s still paying for her youthful transgressions, tethered to the family home by her domineering mother, Hilary (Geraldine James), and forced to provide care for her father, who is going through the early stages of dementia. Little wonder then that she chooses to bail out of her own birthday party in order to head to the local nightclub to chase up some drinks and a little action. On her way home, she bumps into Pascal (Johnny Flynn), a rough-hewn local handyman, who, it transpires, has also broken a few rules in the past. To Moll, he personifies the idea of escape and the two of them begin a passionate affair, much to the undisguised disgust of Moll’s mother and her straight-laced older sister, Polly (Sharon Tarbet). They are all too aware that a spate of brutal murders is currently unfolding on the island and they make no secret of the fact that Pascal is their number one suspect…

What might so easily have been a run-of-the-mill murder mystery is elevated into something much more profound as Moll’s dreams, preoccupations and hangups are expertly brought into the mix, maintaining a hazy borderline between what’s real and what might only be imagined. At various points in the story, I find my suspicions switching back and forth like a ride on a roller coaster with malfunctioning brakes – and, if there’s a certain ambiguity about the film’s conclusion, it’s no bad thing, offering plenty to discuss – and maybe even argue about – long after the closing credits have rolled. Both Buckley and Flynn (the latter also currently carving out a successful career as a folk singer) acquit themselves well and, as the ice-cold, uptight mother, Geraldine James is her usual brilliant self.

Shown here in an Unlimited screening, the film gets a regular release towards the end of the month and is well worth your attention.

Martin McDonagh’s latest play, Hangmen, marks a significant change from his earlier, Ireland-bound dark comedies – but it shares with them an incredible ear for dialogue and an uncanny knack for finding humour in the bleakest of situations. If you thought The Lieutenant of Inishmore pushed this quality as far as it could go, then prepare yourselves to go just a little bit further. If I told you that this play begins with a man pleading for his life, just moments before his execution, you probably wouldn’t expect to be laughing out loud. But trust me, you will be. Originally a Royal Court production, Hangmen has now transferred to the Wyndham Theatre, where it’s playing to packed houses every night and it’s easy to see how it has achieved its ‘hot ticket’ status.

We start in the gaol cell of convicted murderer, Hennessy (Josef Davies), about to be despatched by Britain’s current chief hangman, Harry Wade (David Morrissey). It’s a brief and shocking scene, the humour suddenly extinguished by the brutal execution itself; and then, just as you’re starting to wonder how they will ever manage to change the setting, the entire cell – walls, floor, door and furnishings – rises majestically upwards into the flies, revealing the interior of a pub beneath. It’s a jaw-dropping transition.

It’s now two years later, 1965. Wade is the landlord of a pub in Oldham and the death penalty has just been abolished. Wade is coasting on his former reputation and is still indulging in an old rivalry with the more famous Albert Pierrepoint, also now a pub landlord in nearby Failsworth. Harry has surrounded himself with a coterie of cronies, who, if you’ll forgive the pun, hang on his every word and treat him as some kind of grotesque celebrity. They are not so much customers as his Greek chorus, commenting hilariously on the action and applauding every twisted thing he says.

Matters take a strange turn with the arrival of Mooney (Johnny Flynn), a smooth-talking Southerner, who seems to know a lot about Hennesy, who went to his death protesting his innocence. Mooney applies to lodge at the pub by exerting his charm on Wade’s wife, Alice (Sally Rogers) and, more especially, on his shy daughter, Shirley (Bronwyn James). It’s apparent from the word ‘go’ that Mooney knows something and he’s come here to make trouble – but what is his connection to the events of the past?

On the night we attend, there’s a technical fault that means the proceedings have to be briefly halted at a very suspenseful moment. We’re worried this might ruin the experience, but the cast respond brilliantly, snapping straight back into character and taking the action on again, without breaking stride. The concluding scenes wrack up the suspense to almost unbearable levels.

Hangmen is a brilliant production, that deserves every accolade that’s been thrown at it, and it confirms McDonagh as one our finest contemporary playwrights. Tickets are in very short supply, but if you can get hold of one, do so, because this is simply too good to miss.