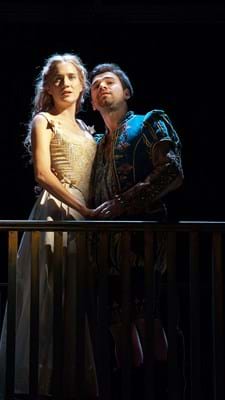 We’re seeing more and more screenplays being turned into stage adaptations these days, but Shakespeare In Love has a stronger claim than most to be afforded such treatment. Originally penned by Marc Norman and theatrical legend Tom Stoppard, it won seven Oscars in 1998 (one of them for Judy Dench, who was onscreen for all of six minutes). It also made the careers of Gwyneth Paltrow and Joseph Fiennes. This adaptation by Lee Hall was first produced in the West End and has a rumbustious musical score by Paddy Cuneen thrown in for good measure.

Set in the year 1564, we first encounter Will Shakespeare (Pierro Nel-Mee) at the Rose Theatre. He’s mostly a jobbing actor, only recently embarked on his career as a playwright and struggling to create his latest commission – a comedy escapade entailed Romeo and Ethel, the Pirate’s Daughter. It doesn’t help that his friend, Kit Marlowe (Edmund Kingsley), is currently enjoying stellar success as a writer, seemingly able to pluck words from the air with a minimum of effort. He often finds himself acting as Will’s muse.

Meanwhile, Viola de Lesseps (Imogen Daines), a noblewoman destined for an arranged marriage with the contemptible Lord Wessex (Bill Ward), dreams of a career on the stage at a time when women never get to tread the boards and where their roles are generally played by willowy young men in drag. When she hears that open auditions are being held for the new Shakespeare play, she disguises herself as a young chap and goes along to give it her best shot. As it happens, Viola is a huge fan of Will’s work and he, in turn, is so impressed by the way she reads his lines, he impulsively casts her as his Romeo. As their working relationship develops and he begins to suspect that this young actor is not exactly what ‘he’ appears to be, the play becomes less the comic romp that Will’s patrons have envisaged and more the romantic tragedy that audiences have come to know. That said, Shakespeare in Love is full of delicious humour with plenty of knowing nods and winks to many of Shakespeare’s other works, especially Twelfth Night.

A sizeable ensemble cast work their doublets and hoses off to keep the action bubbling away while an ingenious revolving stage provides a whole variety of locations, most effectively when it contrives to offer both a backstage and a front-of-house look at the same scenes. Cuneen’s music regularly supplies a series of jaunty, hand-clapping interludes and everything scampers along at such a sprightly pace there’s never time to pause and reflect on how unlikely the story is – but then, isn’t that the very essence of Shakespeare in the first place?

This is a delicious treat for Shakespeare fans and lovers of comedy alike, an ingenious and jocund adaptation that provides a most satisfying night at the theatre.

Legally Blonde began life as a movie in 2001, based on a semi-autobiographical (unpublished) manuscript by Amanda Brown. It became the subject of a Hollywood bidding war, made a star of Reese Witherspoon and went on to earn over one-hundred-and-forty million dollars at the box office (and this at a time when one-hundred-and-forty million dollars was considered a lot of money!). Perhaps it was inevitable that it would be turned into a musical but what few people could have anticipated was the fact that the resulting show would actually improve upon the film.

From the opening chords of the first song, this version – slickly directed and choreographed by Anthony Williams – is a bright, shiny bauble that virtually dares you not to enjoy its outrageous antics. Okay, so it’s double fluff with a side order of fluff but, my word, what brilliantly acted, superbly choreographed fluff it is!

Elle (Lucie Jones) is a style icon, the one that her friends seek out whenever they need tips about what clothes to wear and which make-up to team it with. When her long-term boyfriend, Warner (Liam Doyle), invites her out for a special meal, she confidently expects him to ask for her hand in marriage – so she’s absolutely devastated when he announces that he actually wants to dump her so he can devote more time to his studies at Harvard Law School. Desperate to win him back, Elle embarks on a daring mission. She will enrol at Harvard too and prove to him that she’s more than just a ditzy blonde…

Once there, she meets up with shy-but-caring fellow student, Emmett (David Barrett), the mendacious and influential Professor Callahan, (Bill Ward), and her rival for Warner’s affections, Vivienne (Laura Harrison). She also enlists a secret weapon: the much put-upon hairdresser and occasional muse, Paulette (Rita Simons), who helps Elle to achieve everything she wants and more.

At a time when the subject of women’s rights is receiving more attention than ever before, it seems particularly appropriate that this story is all about a woman triumphing over adversity and over men’s preconceptions about who she is and what she is capable of. The ‘Harvey Weinstein’ moment at the start of the second act is genuinely hard-hitting, prompting a moment of uncomfortable silence in amongst the candyfloss. It’s surprisingly effective. If I’m making it sound a bit po-faced, please don’t be fooled. The messages are all served up with huge dollops of fun. The script is often laugh-out-loud funny and there’re some eye-popping dance sequences (the one where a large group of dancers indulge in synchronised skipping is a particular stand-out). I also love the fact that, even with a cast of over twenty actors, everybody has their moment to shine.

If you’re in the mood for an enjoyable night at the theatre, you really won’t do much better than this. Only the stoniest-faced curmudgeons will be able to resist its charms. I used to think of myself as one of these… but there I was, clapping gleefully along with the rest of the audience.

Note to self: I really must try harder. 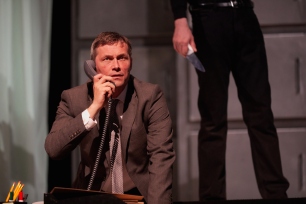 Not Dead Enough by Peter James Directed by Ian Talbot

Not Dead Enough by Peter James Directed by Ian Talbot

Murder mysteries are extremely popular, particularly, it seems, when presented in book or TV form: police procedurals regularly top the TV rankings, and crime novels – especially series with returning detectives – are big-hitters too. Peter James, for example, has sold over 18 million copies of his books worldwide.

In my experience, however, such stories tend to be less successful when performed on stage, unless they’re played for melodrama and for laughs. Because, let’s face it, the stories are often ludicrous, featuring crimes of such demented complexity and ingenuity that they require a very strong suspension of disbelief. And the schlocky side of things is more exposed on stage than it is in other forms: there’s no easy cutting away, no close-ups, no internal dialogue.

There are non-naturalistic techniques, of course, which could more than compensate for the shortcomings, but in this production – and in others I’ve seen – these are eschewed for a more realistic approach. But, while I sometimes think this is a shame, in this particular instance, it seems to work. Okay, so there are a few awkward moments which provoke incongruous laughter from the audience but, for the most part, playing it straight serves the production well.

Bill Ward plays Superintendent Roy Grace, the central character in James’ “Dead” series. He suits the role, displaying just the right balance between gravitas and levity. He’s ably assisted by Laura Whitmore as Cleo Morey, who serves as both love interest and pathologist. But the starring role is – of course – the chief suspect Brian Bishop, played with absolute relish by Stephen Billington.

The piece is pacy, well-structured and very engaging. The two-tier set keeps us firmly in the world of work, switching between the police station and the path lab, with the domestic sphere very much off-stage.

And, if the final pay-off is as preposterous as it is audacious, it really doesn’t seem to matter, as this is a genuinely exciting tale – a cracking good night at the theatre.