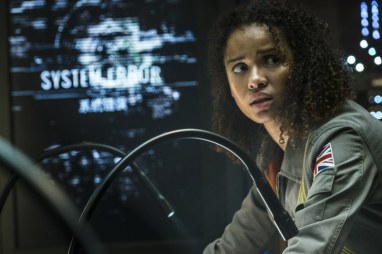 J J Abram’s Cloverfield franchise has always wielded an element of surprise as part of its arsenal. The first film, a compelling ‘found-footage’ creature feature, directed by Matt Reeves, was sneak-released to cinemas in 2008, and was, in this reviewer’s opinion, a low budget masterpiece.  Its 2016 successor, 10 Cloverfield Lane was a tense, claustrophobic thriller that initially appeared to have nothing whatever in common with its predecessor; until, that is, you reached the film’s final third and everything went completely (and satisfyingly) berserk.

And now, here’s The Cloverfield Paradox, directed by Julius Onah and somehow released direct to Netflix with hardly anyone (including the cast!) aware that this was going to happen. As a means of grabbing attention, it works a treat – but there have already been many voices on social media branding the new release as a complete dud – and news that a fourth instalment, with a Second World War setting, is already in the can have led many to believe that Abrams has, quite literally, lost the plot.

The opening of Paradox certainly grabs the attention, playing like a lost episode of Black Mirror. It’s the year 2028, the earth’s energy supplies are rapidly dwindling and the world teeters on the brink of nuclear war. Ava Hamilton (Gugu Mbatha Raw) is poised to leave her partner, Kiel (David Oyelowo) to go on a mission into outer space. She and the rest of her crew intend to use ‘The Shepard’ – a particle accelerator – to provide the earth with an artificial power supply – but they are warned from the very beginning that in so doing, they risk inadvertently opening portals that will allow alternative realities into existence. Well, they can’t say they weren’t warned.

The story now leaps forward to the mission itself, where Ava and her companions are trying to initiate the ‘Shepard.’ At first, they appear to have been successful – but then some very strange things start to happen… for a start, they can’t seem to find any trace of the earth. Then, they find a woman, Jensen (Elizabeth Debicki) trapped behind the walls of the spacecraft. She claims to be a trusted member of the crew, but they have never set eyes on her before. Meanwhile, engineer Volkov (Aksel Hennie) starts having some very nasty digestive problems and as for Mundy (Chris O’ Dowd)… what exactly has happened to his left arm? Meanwhile, back on earth, Kiel is having some pretty intense problems of his own…

And that’s pretty much it. The film cuts back and forth between its two locations throughout. It’s nicely shot and for the most part, it galumphs along engagingly enough, even though it soon becomes apparent that this is not so much a Cloverfield film as something else that has been slyly retrofitted to slot into that cinematic universe. Indeed, apart from a couple of subtle visual references, you’ll have to wait until the film’s closing moments to make any real connection with those illustrious predecessors.

Perhaps unsurprisingly, in an age where film fans are more polarised than ever before, some viewers have excoriated Paradox, blasting levels of vitriol in its general direction that seem somewhat excessive. It really isn’t that bad – just a bit mediocre and nowhere near as good as its progenitors. And of course, the convenient thing about Netflix is, if you don’t like what you’re watching, you can always reach for the ‘off’ switch. 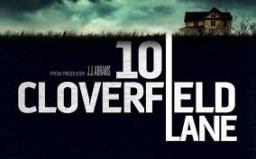 You have to hand it to J.J. Abrams. The original Cloverfield was arguably one of the best shakey-cam horror films ever, a creature feature that starred a giant alien, venting its wrath on New York (with particular reference to the Statue of Liberty). Interestingly, Abrams managed to sneak the film out under the radar, meaning that nobody had an inkling about its existence until the first trailers appeared in cinemas. With 10 Cloverfield Lane, he’s somehow managed to repeat the trick, despite all the attention focused upon him because of a certain little Star Wars movie. So how does this film (produced by Abrams and directed by Dan Trachtenberg) relate to the first story? Well, interesting question…

Michelle (Mary Elizabeth Winstead) falls out with her boyfriend, climbs into her car and drives off into the night. Then she’s involved in a sudden and quite shocking accident. When she wakes up, she’s being kept prisoner in the underground bunker of survivalist Howard (John Goodman) who tells her that there’s been an ‘attack’ above ground and that everybody up there is dead. She’s then introduced to Emmett (John Gallagher Jnr) a local guy with a broken arm, who has taken refuge with Howard and pretty much confirms his story. The three of them, it seems, could be stuck down there for years, but luckily Howard has laid in plenty of provisions… including a selection of jigsaw puzzles.

The film divides, more or less, into three distinct sections – the first third is a mystery (what really is going on above ground? Is Howard telling the truth or is he actually some kind of power-crazy nut job with a hidden agenda?) Part two slips effortlessly into psychological thriller territory, as Michelle  discovers some unpalatable truths about Howard and plans her escape. And part three… well, it would be criminal to give too much away, but suffice to say that the film, brilliantly scripted by John Campbell and Matthew Stuecken) expertly and repeatedly pulls the rug out from under you, until you barely know what to expect next. Despite its cross-genre nature, its a riveting ride from start to finish.

As good as the first film? Yes. It’s so different and yet, in its own way, it’s another absolute corker. Go see it and be prepared for surprises.