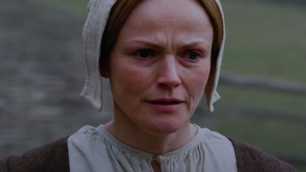 Thomas Clay’s oddly titled film has clearly been a labour of love. Ten years in the making and set shortly after the end of the English Civil War, it’s been well reviewed elsewhere – and it stars Maxine Peake, surely the closest thing to a guarantee of quality that film lovers could reasonably ask for. So finally viewing the finished product comes as a crushing disappointment.

There are, of course, some good things to say about Fanny Lye Deliver’d. The look of the film is ravishing and the authenticity of the period setting sings out from just about every frame, putting me in mind of Michael Reeves’ wonderful Witchfinder General. A pity then that the authenticity doesn’t seem to extend to teaching the actors how to convincingly ride horses; they all look like they’ve never sat on a horse before, let alone ridden one. The musical score (composed by Clay and played on period instruments) is also rather good. But then there’s the story…

Fanny (Maxine Peake) is the hard-working wife of the much older John (Charles Dance), a former soldier and a hard taskmaster. It’s clear from the outset that Fanny is led a dog’s life, toiling from sunup to sundown, as she cares for her husband and her young son, Arthur (Zak Adams). The family’s routine is rudely disrupted by the arrival of Thomas Ashbury (Freddie Fox) and Rebecca Henshaw (Tanya Reynolds). The couple arrive stark naked and steal clothes from the Lye’s wardrobe but, when they explain that they have been set upon and rubbed of everything they own, the Lyes take them in, feed them, and tolerate their strange behaviour.

But a visit from the High Sheriff (Peter McDonald), who is in pursuit of two ‘heretics,’ changes everything, unleashing a whole series of violent events…

This might work if the visitors were charming enough to convince an audience that they really could fool a family like the Lyes into accepting their story, but, as played by Fox and Reynolds, they are about as likeable as a cockroach infestation. Quite why young Arthur would trust them – when their only interaction with him involves bullying him mercilessly – is therefore baffling.

We’re told that the two visitors represent a new sexual freedom, one that challenges the strictures of Puritanism,  but – when this supposed freedom seems to be demonstrated by its followers acting just as brutally as the people they supposedly oppose  – it doesn’t really cut the mustard. Furthermore, since the cathartic effect on Mrs Lye is the whole raison d’être for this story (narrated by Henshaw, years after the event) it’s frustrating to see how little opportunity Peake is given to shine, mostly having to convey Fanny’s inner turmoil with sidelong glances and occasional shrugs.

As if the nasty, spiteful storyline isn’t enough to put me off, the film has a slow, lumpen middle section, which drags remorselessly.  I find myself listening to Thomas Ashbury’s heavily accented drivel and vainly wish that Curzon Cinema would get around to offering subtitles for their films.

Fanny Lye Deliver’d feels like something of a missed opportunity, its good points totally swamped by an unpleasant and rather unconvincing storyline.