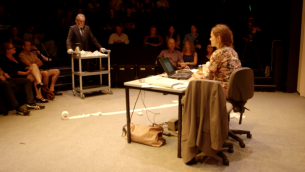 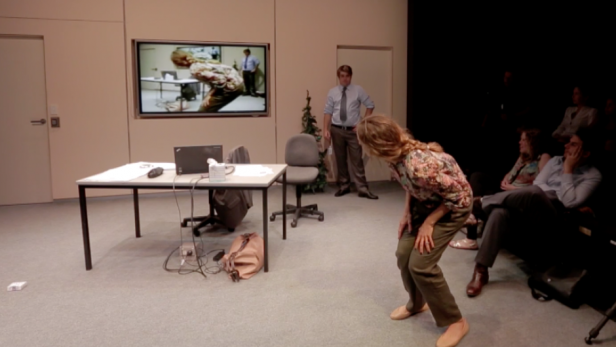 The worldwide pandemic is leading us into some unexpected waters. My previous knowledge of Australian Theatre would best have been described as ‘very minimal’. But after recently watching and enjoying Emerald City on Digital Theatre, we’ve been prompted to seek out another production by the National Theatre of Australia.

Liberty Equality Fraternity is a tight little three-hander that plays rather like a witty update of Kafka’s The Trial, demonstrating how, in the age of social media, it’s impossible for anyone to have secrets. Whatever we do, whatever we say, it seems that somebody is always watching us.

Orlagh (Caroline Brazier) sits alone in a tiny room in front of a blank screen. She’s been at work on what seems like a normal day, when she finds herself unceremoniously bundled into isolation, with no real explanation of what’s happening to her. Has she broken some obscure law? Is she about to be accused of something? Then in comes ‘Arkie’ (Andrew Ryan). It’s not his real name, he explains, but refers to an extinct bird that he’s rather fond of. Arkie, it turns out, knows a lot about Orlagh. He has intimate details of every aspect of her life, including incriminating photographs which soon start to appear on the screen behind her – and, it transpires, he’s trying to establish connections between her and other people, some of whom she knows, and some she has never heard of.

As the interrogation continues, Orlagh’s fears start to mount and they are not exactly assuaged with the appearance of Walter (Helmut Bakaitis), whose suave and effortless dismissal of all that has gone before seems, if anything, even more sinister.

This is a dark and often caustically funny piece, written by Geoffrey Atherden and featuring sterling performances from the cast. Ryan is particularly good as the boorish Arkie, frantically trying to maintain control but subject to to his own fears and inadequacies, as Orlagh gradually begins to get the measure of him and turns his techniques back on him. It soon transpires that Arkie too has secrets he’d rather not share with the world.

The play asks some pertinent questions about the perils of contemporary living. Why are we so ready to share every detail of our lives on social media? Do we honestly believe that such platforms are harmless… that they might not one day be used against us?

Liberty Equality Fraternity may not provide any answers but it certainly asks some highly relevant questions.