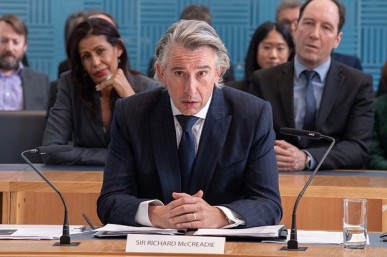 Steve Coogan’s regular collaborations with director Michael Winterbottom always yield interesting results. There’s the iconic 24 Hour Party People, the various iterations of The Trip, the splendidly labyrinthine A Cock and Bull Story – but none of these can quite prepare a viewer for the caustic evisceration of venture capitalism that is Greed. The film isn’t subtle in its approach; on the contrary, it goes in with all guns blazing and neatly obliterates its chosen targets.

Coogan plays Sir Richard ‘Greedy’ McCreadie, a man who has positioned himself as a major player in the fashion industry, mostly by virtue of being meaner and crueller than the competition. As he approaches his sixtieth birthday, he finds his image smeared by bad publicity, so he decides to throw a Gladiator-themed birthday bash on the Greek island of Mykonos. He invites his ex-wife – and titular head of his company – Samantha (Isla Fisher), his new partner (Shanina Shaik), his aged mother (Shirley Henderson), his son, Finn (Asa Butterfield), and a whole host of VIPs. The event will be staged as a gladitorial extravaganza, which naturally involves building a Roman ampitheatre and will even feature a lion called Clarence. What could go wrong?

Through the ensuing confusion wanders the hapless Nick (David Mitchell, pretty much playing himself). He’s Sir Richard’s chosen biographer, clearly struggling to put together a sympathetic portrait of an odious subject – though he does find some solace in his brief exchanges with personal assistant, Cathy (Pearl Mackie), who has her own reasons for hating her boss. McCreadie is a man who complains that the local beach is occupied by ‘unsightly’ Syrian refugees, a man who – instead of paying them to make themselves scarce (which would be bad enough) – tricks them into working as his waiters, complete with Roman slave costumes. With his slicked back grey hair and outlandishly capped teeth, McCreadie is quite clearly styled on Sir Philip Green, right down to the appropriation of his workers’ pension funds, the profits from which go straight into the purchase of yet another luxury yacht. If anybody on the planet had an ounce of sympathy left for Green, this film will neatly extinguish it.

Winterbottom (who also wrote the screenplay) makes no bones about his utter contempt for his subject. Though he examines McCreadie’s formative years, when he was card-sharping his way through boarding school, there’s never any attempt to create sympathy for the character. He is, quite simply, the product of privilege – an arrogant, hateful man addicted to the aquisition of more and more wealth, for no better reason than the fact that he has a natural ability for it. Though Coogan often has some amusing lines, its easier to laugh at McCreadie than with him.

Greed has been widely criticised for a scattershot approach to its central subject, but it’s fueled by an almost incandescent sense of anger, a disgust that creatures like McCready are allowed to exist and prosper in a world that ought to have the sense to depose them The closing credits offer a horrifying list of statistics about the world’s wealth, but they are hardly necessary. The film has already instilled a feeling of utter shame.