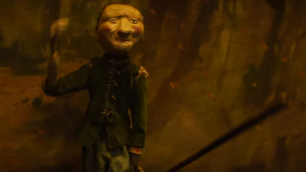 I grew up in a seaside town, where Punch & Judy shows were a familiar sight. I rarely watched one all the way through, but the characters have long been familiar. I like the tawdry end-of-pier atmosphere, the red-striped tent, the enthusiastic glove-puppeteering, the silly swazzle voice. I’m less drawn to the storyline, such as it is, especially to Mr Punch’s endless bashing of Judy, his long-suffering wife.

In Mirrah Foulkes’ feminist reimagining, Judy (Mia Wasikowska) seeks revenge. She and Punch (Damon Herriman) are both puppets and puppeteers, doomed to live their avatars’ mistakes. They’re skulking in Judy’s home town of Seaside (nowhere near the sea), holed up in her ancestral home, hoping to be spotted by talent scouts so they can move on to the big city. But their undoubted skills are marred by Punch’s alcoholism and unreliability: he can’t be trusted to look after their baby, nor to keep away from his mistress, Polly (Lucy Velik). But, when Punch’s selfish ineptitude wreaks real tragedy, Judy realises she’s had enough…

The action takes place in a vague, non-specific, sort-of-seventeenth-century England, and the set is sumptuous, all fairy tale turrets and higgledy-piggledy stone streets. But the picturesque streets belie a dark undercurrent, where the unctuous Mr Frankly (played with evident relish by Tom Budge) presides over regular stonings, hangings and banishments, punishments meted out to those hapless souls – usually women – who don’t quite conform to the town’s twisted rules.

There’s a change of pace as Judy finds kindred souls in the outcasts living in the nearby woods, an army of dispossessed women. In these sections, we see an alternative: a communal, accepting way of life, where everyone works for the common good. Interestingly, most of the humour is in the darker, Seaside-based scenes; in the woods, everything is more serious and contemplative.

The marionettes are important; their imagery is compelling. Glove puppets are usually used in real Punch & Judy shows (marionettes were used originally when they came to Britain from Italy in the 1600s, but were replaced by glove puppets soon afterwards). Marionettes are far more expressive, and their strings a well-worn metaphor for a lack of autonomy.

I like this film. It’s not subtle, but neither is its source material, and the gaudy slapstick of a Punch & Judy show is captured, even as it’s being subverted. Okay, so some of the accents are all over the place, veering from Yorkshire to Ireland by way of Jamaica within a single sentence,  and I don’t really buy the outcasts’ hippy Tai Chi sessions. But Wasikowska is convincing as the wronged woman, and Herriman horribly charming as her despicable husband. Daisy Axon makes a strong impression as Scotty, an outcast child who dreams of a forever home, and Benedict Hardie is excellent as bumbling policeman, Derrick. All in all, a sprightly, eye-opening affair.