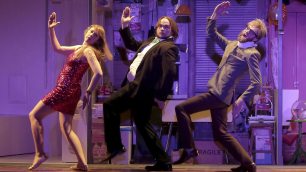 This quirky, captivating production from French theatre group Le Fils Du Grand Réseau is a recent winner of the Molière award for Best Comedy, and is playing to packed houses at the Pleasance Grand. It’s easy to see why. With its impeccably timed visual gags and ingenious production design, it contains beautifully devised sequences that are comparable to the work of Mack Sennet at his best. It is, essentially, a silent comedy, one that – again and again – elicits absolute gales of laughter from the auditorium.

This is all about the eccentricities and indignities of city living. We observe the lives of three neighbours, living cheek by jowl in adjoining attic apartments in Paris. There’s a shambolic hoarder, eking out a lonely existence amidst chaotic heaps of detritus; a karaoke-loving guy who inhabits a zen-like, white painted box; and a new arrival, a woman who styles herself as a holistic healer-hairdresser-masseur, but who clearly has none of the necessary training to practise these skills with any degree of success. When both men cast an asquisitive gaze in her direction, the scene is set for a series of rivalries and madcap misadventures.

There’s something deliciously old school about this production. I love the way it tells its unfolding story over an extended period of time, showing how people have the capacity to change – and I particularly like a brief moment where the technicians toiling behind the scenes are ‘accidentally’ put on display. If the story occasionally leans a little too heavily on the toilet gags, it’s nonetheless endlessly inventive, and I can truthfully say it isn’t quite like anything I’ve seen before.

Book your seats for the Grand. You’ll laugh mightily, even when the merde hits the fan.