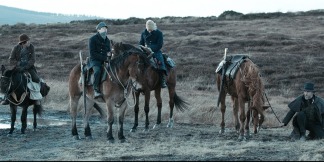 A taciturn soldier deserts the army, heads back to his homeland  and finds that, in his absence, his family has been decimated. Powered by a hunger for revenge, he sets off to exact bloody mayhem on the people who have wronged him.

It sounds like the plot of a typical Clint Eastwood western, but here the army in question is the English forces in Afghanistan, the soldier is Feeney (James Frecheville), his family is based in County Connemara and the year is 1847, when the potato famine is wreaking mayhem on the Irish nation. What’s more, the English landlords are turfing out all tenants who cannot afford their rent, or will not ‘take the soup’ – a free handout that is only given to those who will renounce their Catholic faith and become protestants.

Once Feeney is embarked on his violent mission, old comrade, and former Connaught Ranger, Hannah (Hugo Weaving), is recruited to track him down, working alongside young English officer, Pope (Freddie Fox). But it’s a long journey to bring their man to justice and, as they progress along their corpse-littered route, Hannah begins to realise that the real enemy here is not Feeny, but the oppressive English landlords, who seem to regard the native population as vermin to be eradicated.

Lance Daly’s film, Black 47, was never going to be a big hitter at the box office but, like so many other mid-list titles, has found a home on Netflix. It’s a bleak, hard-hitting movie, beautifully filmed in desaturated colour by Declan Quinn and, while it pulls no punches with its political message, it focuses more on the action scenes, of which there are plenty. There are some superb actors in small roles. Stephen Rea shines as local opportunist, Coneely, and Jim Broadbent, usually such a jovial presence, makes a plausible villain as the sneering, venal Lord Kilmichael. There’s even the presence of rising star, Barry Keoghan, playing (of all things) an English soldier.

Perhaps the film can be accused of a certain heavy-handedness (virtually every English character we meet is a contemptible villain) but this is nonetheless a decent action film that keeps us suitably gripped to the final scene.