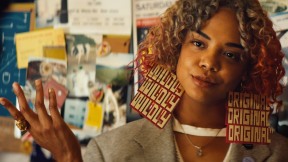 Boots Riley is a new name to me but, on the merits of this, his first feature, it’s one I expect to hear a lot more of in the near future. Sorry To Bother You is a quirky slice of satire and, in many ways, a polemic – a powerful critique of the current state of American society. Riley, who in a recent interview proudly announced that he is ‘a communist,’ clearly has a healthy distrust of big corporations and their ethos of rampant greed. He’s also more than happy to state his dissatisfaction with the situation.

The action occurs in a near-future Oakland, where a corporation called WorryFree offers workers food and board in exchange for a lifetime of unpaid servitude – and where the most popular show on TV is one where the participants are ritually humiliated and beaten to a pulp. Cassius Green (Lakeith Stanfield) lives in his Uncle’s garage, where he shares the bills with his performance artist girlfriend, Detroit (Tessa Thompson). Constantly strapped for cash, but understandably reluctant to take the WorryFree route, Cassius seeks a post at telemarketing company, RegalView, where he is told to ‘stick to the script’ and where he will be paid a commission on every sale he makes.

At first he struggles to stop his clients from hanging up on him, but then veteran employee, Langston (Danny Glover) gives him a bit of free advice. ‘Use your white voice, bro,’ Langston urges him, ‘and things will improve.’ Cassius prevaricates for a while, but soon finds he has a real flair for impersonating a white man’s voice. It’s not long before he’s closing many profitable deals and is being groomed to take the gold elevator up to the top floor, where the ‘Power Dealers’ rule.

But when co workers, Salvador (Jermaine Fowler) and Squeeze (Steven Yeun) decide to form a pressure group with the intention of securing a fairer deal for RegalView’s workforce, Cassius finds himself with a difficult choice to make…

What starts as an irreverent and amusing farce takes a much darker turn when Cassius opts to ride that elevator to the top floor. Up there, he is the guest at a lavish party thrown by RegalView’s enigmatic CEO, Steve Lift (Armie Hammer), who pressures him into performing a rap routine (something he has no talent for), and who then offers him a vast amount of money to head up a brand new initiative…

As I said earlier, this is a debut film and since Riley’s previous experience has been as a musician, STBY occasionally looks a little rough around the edges. There are some poorly lit nighttime sequences and occasional bits of character interplay that don’t really develop into anything – but there’s no doubting the power and passion fuelling this story. A scene where Cassius spills the beans about RegalViews secret plans only to see the companies shares go through the roof is, in the era of Donald Trump, all too believable. Stanfield and Thompson are beguiling in the lead roles and, as you might expect, there’s a powerful soundtrack to push along the action.

Slightly deranged and very, VERY original, this is the opening salvo in what could prove to be a powerful new voice in contemporary cinema. It’s well worth checking out.