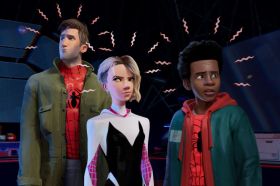 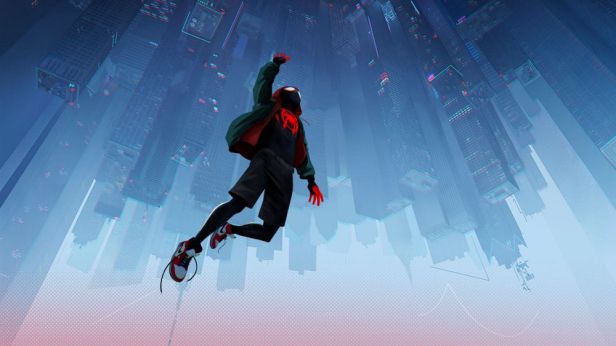 That unwieldy title notwithstanding, this is a genuine treat. For those who are wary of watching yet another retread of a tired and over-familiar concept, let me assure you that this doesn’t so much as reinvent the franchise as grab it by the neck, tear it to pieces and start all over again. The result is one of the most exciting slices of animation I’ve seen in a long time.

Troubled teenager Miles Morales (voiced by Shameik Moore) is struggling to fit in to the straight laced Brooklyn high school where he has recently enrolled. His father, Jefferson (Brian Tyree Henry) is a New York cop, a disciplinarian and a vociferous Spider-Man critic. Miles finds himself gravitating towards his mysterious Uncle Aaron (Mahershala Ali), who is an adventurous sort, prone to bending the rules. One night, when Miles and Aaron are indulging in a graffiti-art session in a deserted stretch of subway, Miles is bitten by a robotic spider and, shortly afterwards, begins to experience major changes to his mind and body.

Understandably confused, he returns to the subway, just in time to witness regular Spider-Man villain, Kingpin (Liev Schrieber), opening up a portal to a whole series of alternate realities and, for good measure, enacting a murder that will have all staunch web-heads shrieking ‘Noooo!’  at the screen. Kingpin’s meddling with reality is an attempt to reconnect with characters from his past, but his machinations have unwittingly invited five different personifications of Spider-Man to leave their own dimensions and head for present-day New York. I won’t list the alternate Spideys in detail but suffice to say: two of them are female and one is a cartoon pig called Peter Porker. The thing is, does Miles, still coming to terms with his new abilities, have the necessary stuff to join up with them?

Phil Lord’s plot may be bat-shit crazy, but it doesn’t matter one jot because Spider-Man: into the Spider-Verse careers along at such a breakneck pace there’s never any time to question the absurdity of it all. What’s more, the eye-popping animation is so extraordinary that it virtually dazzles the viewer into submission with levels of ingenuity and chutzpah rarely witnessed in this genre. There’s a whole riot of styles thrown into the mix, with individual frames freezing momentarily to do homage to veteran artists like Steve Ditko and John Romita, and more experimental sequences that break new ground entirely. It’s fabulous stuff. Oh, and  just wait till you see what they’ve done with Doctor Octopus!

Purists may not approve of some of the liberties that have been taken with the source material, but the fact is that the Spider-Man franchise has already been pretty thoroughly milked (yet another live action movie is due to land early next year), so if you’re going to slip into that distinctive red and blue outfit, you’d better have something different to offer. And believe me, this film has that in abundance.

Oh yes, and this features one of the best Stan Lee cameos ever (voiced by the man himself, of course), which, given his recent demise, makes it all the more poignant. Here he plays the owner of a cheap novelty shop, selling knock-off Spider-Man outfits and pointing to a sign that says ‘No refunds.’ Priceless.

There is only one other viewer at the afternoon screening I attend, and that’s a shame, because here’s one superhero movie that actually deserves closer investigation. Don’t let it swing over the horizon without giving it a spin.