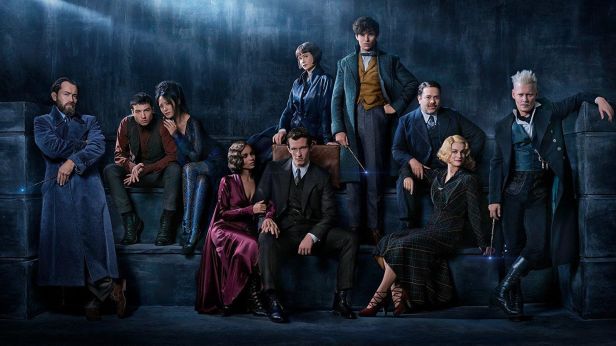 One thing is certain: this film will have its fans. Enthusiastic, excited fans, thrilled to be offered further insights into their beloved Potterverse. It’s sure to do well: even the Wednesday evening showing we’re at is sold out, and there’s not a kid in sight.

But that’s fine, because this isn’t really a kids’ film (although lots of them will love it too). This is squarely aimed at twenty-somethings: young adults who’ve grown up with the magical world existing alongside their own. This is a film for those grown-ups who know if they’re a Ravenclaw and proudly wear their house colours; who form the queues outside the now ubiquitous ‘Boy Wizard’ shops; who know so much about Rowling’s realm that they’re not bewildered by the huge cast of characters, nor by the casual references to familial relationships. This film is for them, and they are vast in number.

But it’s not for me. I’m not exactly a nay-sayer: I loved the first three Harry Potter books, and thought the others were okay. I quite liked the films too. I understand why they’re popular. But this latest instalment of the Fantastic Beasts spin-off is a step too far for the casual viewer, and it fails to work as a film in its own right.

I wasn’t keen on the last one, but at least it stuck to its remit: it was definitely about the beasts. This time, they’re peripheral; instead, we’re stuck in a world of dull politicking, with clumsy parallels to the rise of the far right. It’s worthy but hardly insightful, and it’s lacking any lightness or sparkle. It just doesn’t feel very magical at all.

Redmayne plays Eddie Redmayne very well; he’s had a lot of practice. He’s up to his usual schtick: all downcast eyes and vulnerability. I’d like to see him trying something else – and I’d like to see Newt develop too. Otherwise, the acting is pretty good, but no one has enough to do: Jude Law is wasted as young Dumbledore. Queenie (Alison Sudol) was my favourite character in the last movie, but she’s far more muted here, and less engaging as a result.

It all looks splendid, of course: the detail is stunning and the world well-realised. But it’s a boring story, with too many people and not enough animals. Enough already. Potter’s legacy should be better than this.