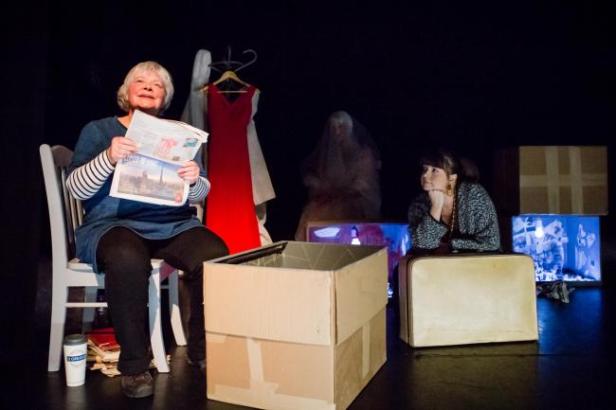 Sylvia Dow’s Stuff, the story of Magda, a woman who struggles with a hoarding disorder, really resonates with me. Not that I have the same affliction – I don’t; I’m definitely on the ‘minimalist’ side of the spectrum – but I did have an uncle who lived a life a lot like hers. The play reminds me of him, and it makes me sad. Mainly because I miss him, but also because of how much he missed out.

Directed by Muriel Romanes, this is a subtle, nuanced piece, told with tenderness and care, and never judgemental: not about Magda and her teetering piles of junk; not about her daughter, Chrissie (Romana Abercromby), who’s never once phoned since she left home; not about Jackie (Pauline Lockhart), the social worker assigned to ensure Magda clears her home because the neighbours have complained.

Carol Ann Crawford’s Magda is at the centre of the piece, and it’s a lovely performance. Magda’s sadness and vulnerability are palpable throughout, but so are her humour and her humanity. And Rosemary Nairne’s opera-singing Mama-ghost adds an extra dimension, physicalising the memories Magda can’t let go, not least her childhood in war-torn Ukraine. The singing is haunting and beautiful.

The set is rather special too. It doesn’t seem so at first: just a pile of boxes and scattered sheet music. But the boxes begin to reveal a doll’s house of recollections, cleverly constructed miniatures, designed by John and Jeanine Byrne. There’s a graveyard, a grand piano, a teetering pile of chairs: eight boxes, eight spaces, eight specific memories. No wonder Magda struggles to give up her precious things.

Tonight is Stuff‘s last night at the Traverse, and it’s sold out – but, if you can get hold of a return ticket, it’s certainly worth your while. This is a thoughtful, thought-provoking play, and I know that it will stay with me.